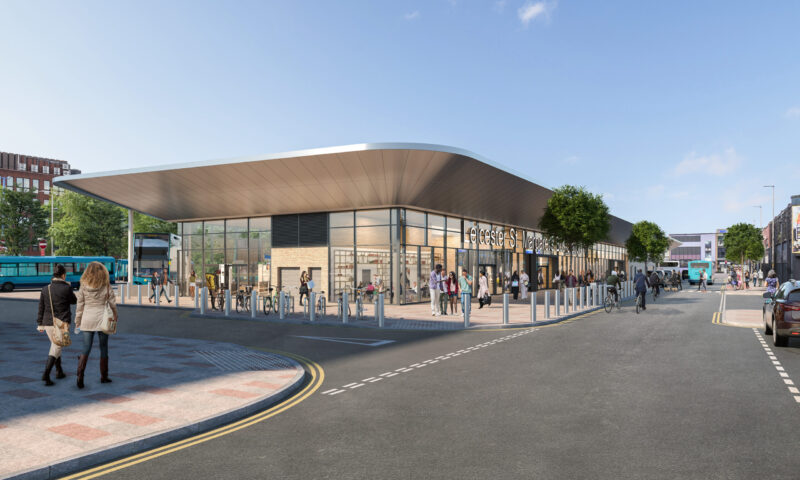 Leicester City Council has begun a £13.5m regeneration of the St Margaret’s bus station as part of a major overhaul of the city centre.

The project will replace the old bus station and aim to create more attractive routes for pedestrians and cyclists.

Encouraging more people to use sustainable transport and cutting the carbon footprint of the city’s buildings are key aims of Leicester’s Climate Emergency Strategy, which sets out a plan to make the city carbon-neutral by 2030.

The project is due for completion by summer 2022.

Commenting on the development, councillor Adam Clarke, deputy city mayor for Environment and Transportation, said: “These exciting plans to replace St Margaret’s Bus Station with a striking, new, and net-zero carbon building represents an ambitious and important step forwards in our efforts to become a carbon neutral and climate adapted city by 2030.

“It shows our commitment to decarbonising buildings and will build on our work to promote sustainable transport and support bus operators to convert to low-emission fleets.

“In many ways, this new carbon neutral bus station building will be a flagship for what we are striving to achieve in Leicester.”

The new station will feature a series of energy efficiency and renewable energy measures, which should help make the new station a net-zero carbon building.

The roof will be fitted with around 750sqm of photovoltaic panels, which will generate enough energy to power the station and feed surplus green energy back into the grid.

Electric bus charging points will also be installed, and the new building will feature storage for 150 bikes and increased capacity for national and regional bus services.

Further, the station will sport glazed walls and a curved aluminium roof, reusing the steelwork frame of the previous building.

A new café, better seating, improved toilets, and digital passenger information are all set to be included as part of the regeration.

The redevelopment of this area is supported by a £10.5m allocation from the Getting Building Fund, a pot of government money awarded to the Leicester and Leicestershire Enterprise Partnership (LLEP) for “shovel-ready” infrastructure projects.

Kevin Harris, chair of the LLEP board of directors, said: “St Margaret’s Gateway is a significant investment in the future of Leicester, and I’m very pleased that the LLEP has been able to support it via our Getting Building Fund allocation.

“A major regeneration project at one of the key gateways to the city, the new bus station and improvements to the surrounding roads will be a great benefit to the local economy, creating jobs, and connecting Leicester to the wider county and the rest of the UK.

“The building’s carbon neutrality is a major boost to our goal of a net-zero Leicester and Leicestershire, and it’s great to see new investment in the green infrastructure of the future.”