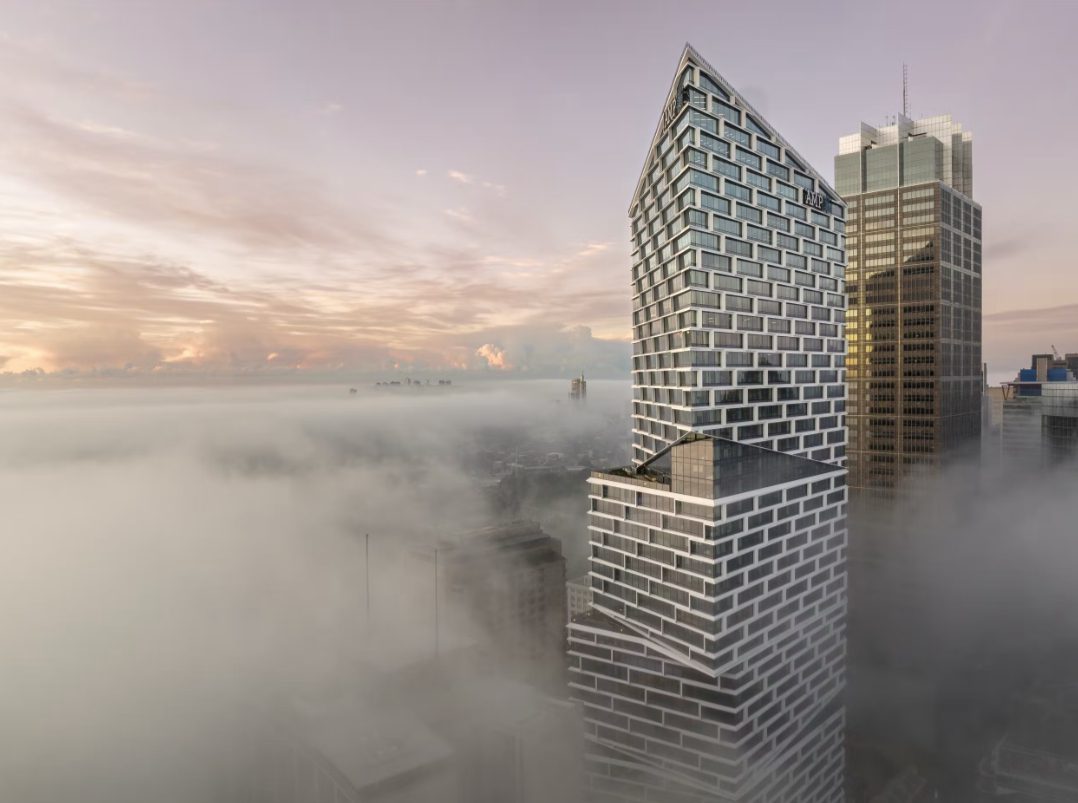 Danish architect 3XN has completed Quay Quarter Tower in Sydney, Australia, which it describes as the “world’s most comprehensive upcycling of an existing tower.”

The scheme, which retained and transformed an existing 1970s tower near the city’s waterfront, was recently awarded the 2022 International High Rise Award for what the jury determined to be an “extraordinary combination of upcycling and densification.”

Situated on 50 Bridge Street, the project centres on the former AMP Centre, which, when constructed in 1976, was the tallest building in Sydney at 188-metres-tall.

In its transformation of the building, 3XN retained 65% of the original structure, including beams, columns, and slabs, and 95% of its original core.

In addition, new floorplates were added to the existing plates in order to double the usable area and increase the building’s capacity from 4,500 daily occupants to more than 10,000.

The team estimates that the resulting embodied carbon savings, measuring over 12,000 metric tonnes, is equal to that of 8,800 one-way flights between Copenhagen and Sydney.

The embodied carbon considerations are mirrored by efforts to reduce operational carbon emissions, including attention to daylight and heat load optimization.

Fred Holt, who is a partner and director of 3XN’s Sydney office, explained: “Upcycling a tower poses enormous challenges from the outset in design and construction.

“You don’t necessarily know the condition of the given structure until you actually begin stripping it back, so it requires a very bold commitment to the idea of transformation right from the start.”

The resulting 216-metre-tall tower is shaped around the concept of a “vertical village” where five separate volumes are stacked on top of one another, breaking down the tower’s mass into smaller communities.

Each volume is arranged around stacked atria to increase natural daylight access in the floorplates, which measure over 21,500 square feet and are connected through a series of spiral staircases.

A majority of the tower, 49 floors, is dedicated to office space, while three floors are devoted to retail.

At the base, a new podium occupies an entire city block to facilitate the retail offering, as well as publicly accessible gardens.

Above, cantilevered modules on the façade wrap around the five hubs, reducing the direct sunlight entering the tower by up to 30% thus eliminating the need for internal blinds and combatting overheating.

The tower’s north façade also gently rotates eastwards as it rises, creating exterior terraces at the base of the five volumes which link to the inner atria.

“We know that we can no longer demolish and build the way we have in the past – that we must instead extend the life and potential of the buildings we already have.

“This is the most essential definition of sustainability in architecture – and the driving force behind Quay Quarter Tower.”

Read next: Stora Enso to develop wind turbine blades made from wood