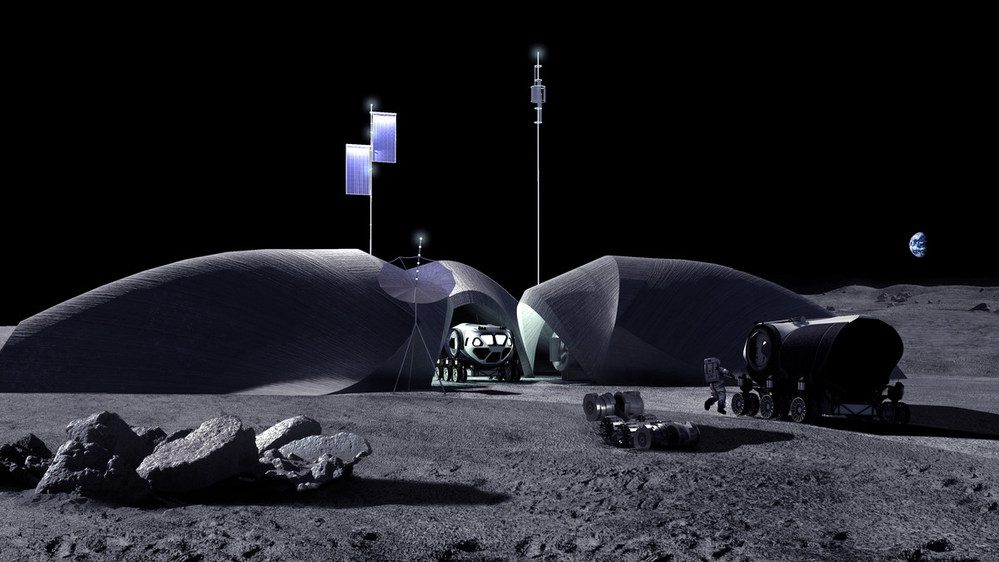 Designed to be constructed by autonomous robots on the Moon’s south pole, the scheme is defined by Romanesque arches that can withstand high compressive loads with minimal material.

LINA’s structural concept will be 3D-printed using an Earth-sourced polymer and lunar soil.

Unlike conventional 3D-printing where layers are added parallel to the ground, LINA will be 3D-printed at a 60-degree angle to allow construction of the vaulted roof.

The arches will be topped with 2.7 meters (8.8 feet) of lunar regolith to provide protection from radiation, micrometeorites, lunar seismic activity, and extreme thermal swings, the company said.

The outpost’s location near the rim of the Shackleton crater on the lunar south pole offers near-continuous sunlight on the crater’s peaks, which the team will exploit for solar power.

Meanwhile, shadows in the crater’s interior will allow for the harvesting of water ice.

When constructed, LINA’s primary function will be to support astronauts on lunar missions, while also serving as a test case for long-lasting structures that could support long-term habitation and further travel to more planets.

AI SpaceFactory was one of five winners of NASA’s 3D-Printed Habitat Competition in 2019. This multi-phase challenge was designed to advance the construction technology needed to create sustainable housing solutions for space exploration.

The firm’s proposal, MARSHA, was designed to be constructed on Mars using Martian soil; properties which have been adapted for LINA by substituting Martian soil for lunar regolith.

“Developing LINA and printing in an environment that is void of atmospheric pressures or weather systems advances that technology through a new context, with new and more precise variables.”

The company said that its polymer composite will support LINA’s geometry for a sustainable and long-lasting structure that could facilitate long-term habitation and further travel to more planets.

NASA’s KSC Granular Mechanics and Regolith Operations (GMRO) Laboratory has been built and fitted with AI SpaceFactory’s 3D printing extruder and mounted on a gantry designed and manufactured by NASA.

The collaboration’s first vacuum prints are expected this year.

Read next: Designs unveiled for floating city in the Maldives