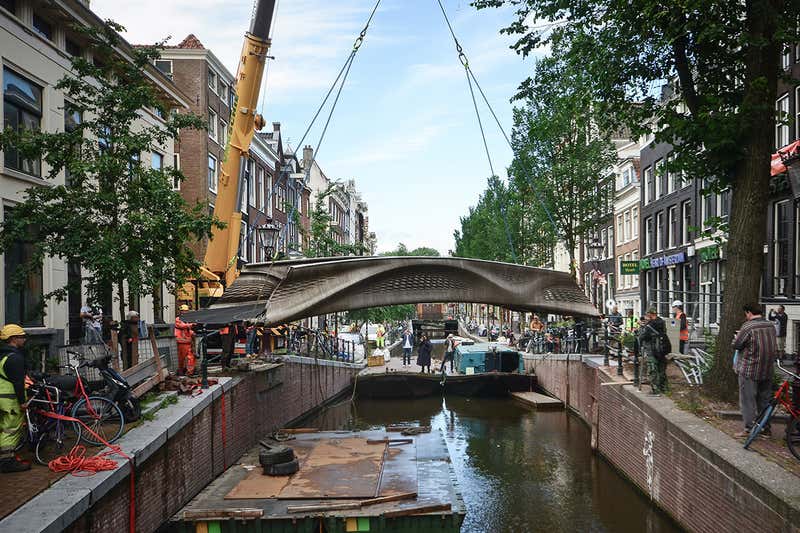 Amsterdam has unveiled the world’s first ever 3D-printed steel bridge, which, aside from being put to use by pedestrians and cyclists in the city, will also be made into a digital twin to improve bridge safety.

The bridge, which was created by robotic arms wielding welding torches to fashion 4,500 kilograms of stainless steel, was lifted into place and opened to the public last week.

The structure was transported over the Oudezijds Achterburgwal canal in central Amsterdam.

Over a dozen sensors were attached to the bridge after the printing was completed.

These sensors will monitor strain, movement, vibration, and temperature across the structure, as people pass over it and the weather changes.

The data collected from the sensors will be fed into a digital model – or ‘twin’ – of the bridge.

Engineers say they will use the model to study the properties of the material.

They will also use machine learning to discern any trends in the data that could flag up the need for maintenance or modification.

They also hope it will help designers understand how 3D-printed steel might be used for larger and more complex building projects.

Investigations into bridge failures often reveal deterioration that was missed.

It is hoped that constant data feedback may be able to prevent these failures by providing an early warning.

Professor Mark Girolami at the University of Cambridge – who is working on the digital model with a team at the Alan Turing Institute in London – said: “One of the things that we found is that the strength characteristics are dependent on the orientation of the printing.

“But what was in some sense surprising was that the baseline strength was what you would expect of just rolled steel, and it actually increased in some directions.”

He added: “3D printing is poised to become a major technology in engineering, and we need to develop appropriate approaches for testing and monitoring to realise its full potential.

“When we couple 3D printing with digital twin technology, we can then accelerate the infrastructure design process, ensuring that we design optimal and efficient structures with respect to environmental impact, architectural freedom, and manufacturing costs.”