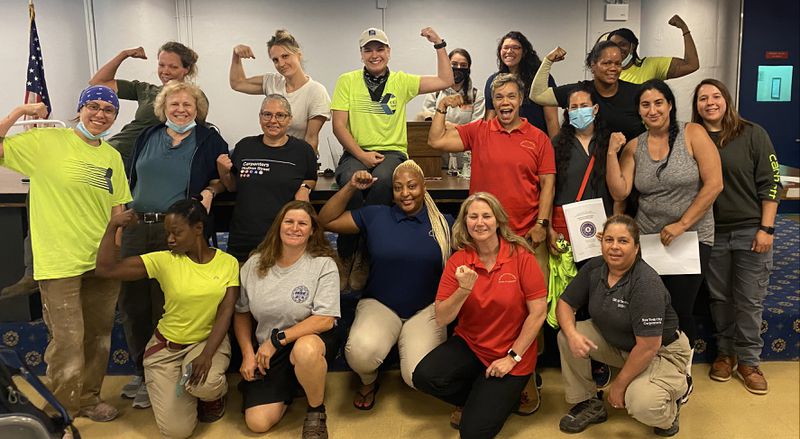 As part of Construction Inclusion Week, The New York City District Council of Carpenters (NYCDCC) recently launched a training programme aimed at promoting equity, diversity, and inclusion for women within the industry.

Alongside the new programme, the NYCDCC has updated it’s Training Center with a new curriculum for instructors to educate their apprentices, with a focus on promoting diversity, equity, and inclusion in the workplace; participating in active caring; and preventing sexual harassment, racism, and bias.

Following the Inclusion and Diversity program, the innovative Sisters in the Brotherhood (SIB) Mentorship Program was launched in August this year, to support female carpenters.

It was designed by the union’s Women’s Committee, and provides an inclusive, safe space for women to learn from more experienced ‘sisters’.

The program will create mentorship opportunities for women who are in, or would like to join the construction field. So far, the program has paired up 24 female apprentices with experienced female mentors.

The union recently appointed an all-female Steering Committee within the program to help recruit and retain more women in the union.

Joseph A. Geiger, executive secretary-treasurer at New York City District Council of Carpenters, said: “To build the most highly skilled carpenters of the 21st Century, the NYCDCC continues to focus on making job sites more inclusive and diverse so that all our members feel valued and respected.

“This not only creates an environment where all union carpenters can excel in their craft safely and confidently, but it makes us a stronger union that will stand out in the increasingly competitive construction industry.”

“I’m proud to be a part of a union that not only respects the diversity of each of our members, but actively works to create opportunities for carpenters historically underrepresented in the construction workforce.

“It has been an honor to launch a mentorship program for our Sisters in the Brotherhood, and I’m thrilled to see the union build upon its commitment to equality through the new Diversity and Inclusion training program.”

Michelle Beckhorn, SIB Mentee, said: “There aren’t many women who specialise in underwater welding, but my union brothers have always treated me with respect. I am thankful for the District Council and the Sisters in the Brotherhood for launching this mentorship program that I am involved in.”

Jessica Hoeverman, SIB Mentor, said: “I wish we had the mentorship program when I was starting my career.

“Having mentors and a strong community of fellow union sisters is integral to creating inclusive environments in which female carpenters can thrive.

“I’m so thrilled to have the opportunity to share my knowledge with my mentee and witness the great things she will accomplish in the industry.”

Read next: HS2 embeds EDI standard across its supply chain

Construction sector growth to bounce back despite challenges,...