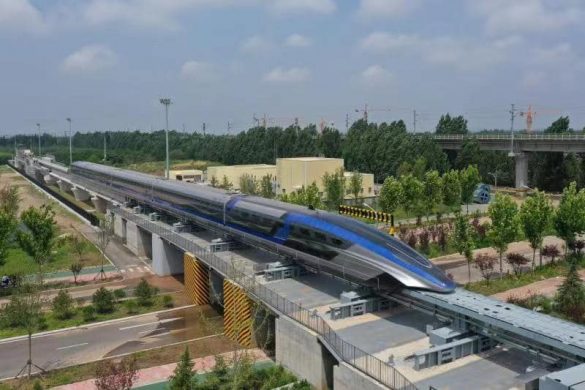 China has unveiled what it claims is the world’s fastets maglev train.

Manufacturer China Railway Rolling Stock Corporation (CRRC) says the train can reach speeds of 600km/h and can travel faster than the cruising speed of a commercial airliner.

CRRC unveiled the first five-car trainset in the coastal city of Qingdao yesterday.

The train is part of a project that began in 2016 to build a commercial maglev service.

A prototype was unveiled in May 2019 and a successful test run was made in June the following year.

This latest version will undergo five years of tests to verify that the novel technology is reliable and to build new maglev lines on which it can run.

CRRC said on Facebook: “At present, the integration and joint commissioning of the system has been completed, and the five-car train has achieved stable levitation and dynamic operation on the commissioning line of #CRRC Sifang plant, with excellent performance in various functions.”

Passengers on the new train will have access to 5G wifi and will be able to charge their phones wirelessly.

According to the CRCC, a train with five carriages has been running on a test line inside the factory.

The production version will have between two and 10 carriages, each holding more than 100 passengers, according to chief engineer Ding Sansan.

Sansan said the train would provide an attractive alternative to those travelling distances shorter than 1,500km.