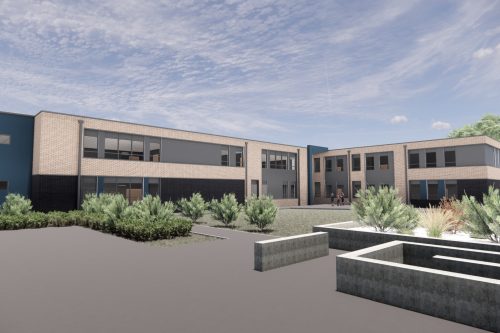 The Preston-based firm is building a new science and technology block for the school, with work to demolish four existing buildings at the Crag Road school – originally built in 1966 – now under way.

Collinson Construction is acting as main contractor for the scheme, with the firm’s modular division building the new science and technology block using modern methods of construction.

This means it can be built at Collinson Construction’s own factory, offsite in Catterall, before being assembled on the school grounds once ready later in the year. The modular construction method means the building can be completed quicker with less disruption for neighbours on Crag Road.

Robert Duxbury, managing director of Collinson Construction, said: “We’re investing heavily into our own modular manufacturing factory in Lancashire, including new state-of-the-art equipment, which, coupled with our modular expertise and in-house design and manufacturing facilities, has allowed the majority of the construction phase to be completed in our factory, with the final fit-out works being completed on site – meaning minimal disruption to the wider school.”

Once complete, the new building will feature five state-of-the-art science laboratories, and new facilities and workshops for design technology and a food technology kitchen. The works will be followed by a second phase later in the year which will add an additional 11 classrooms.

John Cowper, principal at Central Lancaster High School, said: “This new state-of-the-art school will be transformational for the education we are able to deliver to the young people of Lancaster.

“Our pupils deserve excellent facilities and the new school will bring a completely new look to the area. Alongside good quality teaching, these facilities will help students receive the best possible education so that they can flourish and go on to achieve at the highest level.”

It is hoped the school will be open to pupils in January, with the second phase set to complete in September 2023.