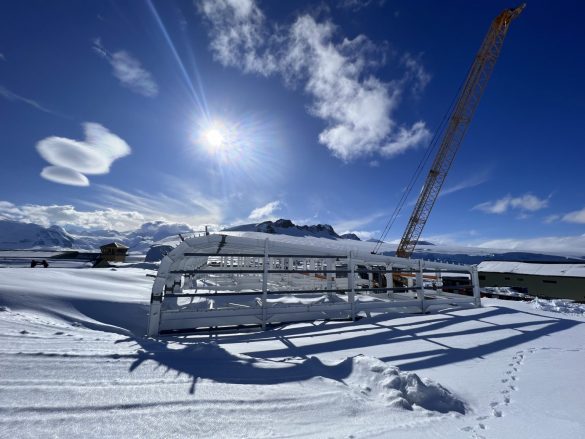 The next phase of the Antarctic Infrastructure Modernisation programme (AIMP) is set to begin with a six-month construction season at Rothera Research Station for British Antarctic Survey (BAS).

The station is the UK’s largest Antarctic research and operations hub that supports leading researchers in frontier science in the region.

This season is looking to be the “busiest and most challenging since the programme began in 2017”, said the construction consortium.

Major works this season include making the new Discovery Building weather-resistant and carrying out airfield improvements, said the developers.

Construction on the two-storey 4,500m2 science and operations building began in 2020. Once complete it will contain preparation areas for field expeditions, a central store, medical facility, offices, recreational spaces, workshops and areas for plant.

To ensure the Discovery Building’s thermal performance, the team will begin insulating and cladding, with internal works also getting underway on glazing and mechanical, electrical, and plumbing. The state-of-the-art building’s science balcony and control tower will also be installed.

The programme is part of a long-term government investment to modernise research facilities in the Polar Regions. It will enable the UK to continue to deliver cutting-edge climate, biodiversity and ocean research and innovation in Antarctica and ensure the future of polar science, said BAS.

A team from BAM has started to clear several hundred thousand tonnes of snow accumulated over the Antarctic Winter from all access routes and construction areas on station. Snow drifts are 4m high in some areas of station.

The remaining construction team arrives later this month following a three and a half week journey onboard the RRS Sir David Attenborough.

‘The most important season yet’

David Seaton, Head of Construction at the British Antarctic Survey, said: “This is the start of the most important construction season yet for the Antarctic Infrastructure Modernisation Programme as we upgrade our facilities in Antarctica to enable the continuation of science delivery and support in this most vital region.

“The pre-deployment training and all other preparation have gone extremely well, the team is motivated and up for the challenge and we look forward to a successful season by the end of which we will have a fully weathertight Discovery Building, keeping us on track for the handover of this wonderful new Science and Operations support asset in 2025, and also have delivered much of the upgraded runway resurfacing and lighting project, putting us in an excellent position to take delivery of our new aircraft in the near future.”

READ – Scott Base redevelopment: Offsite construction at the edge of the world

Robert Kerr, Site Agent at BAM said: “The first boots are on the ground and the beginning of a new construction season is off to a great start.

“So much emphasis is placed on the delivery of work at Rothera that it is easy to overlook the enormous amount of planning and preparation work required by all partners. It is great to see all this hard work paying off.

“The construction team of 55 this year consists of approximately 35-40 returners, which will be key in delivering a very challenging programme of work. Among many objectives for the season, cladding the building will be a defining point in the programme, allowing us to transition from external works to internal works.

“The snow clearing and site establishment works are progressing well and we all look forward to delivering another successful season at Rothera.”

Bruce Wulff, Project Director at Ramboll and Framework Manager, added: “The coming construction season looks set to be our most complex and ambitious yet. A huge amount of work from all the partners has gone into planning for the Discovery Building and the runway upgrade works.

“Teams are now on site and starting to clear the snow to allow for this season’s planned activities: cladding the building, constructing the runway control tower, starting internal works, replacing the runway lighting, and digging trenches across the runway for new duct routes. We wish the team on site every luck as they prepare for this exciting season ahead!”