Home » Digital construction trends: what to expect in 2023

Digital construction trends: what to expect in 2023 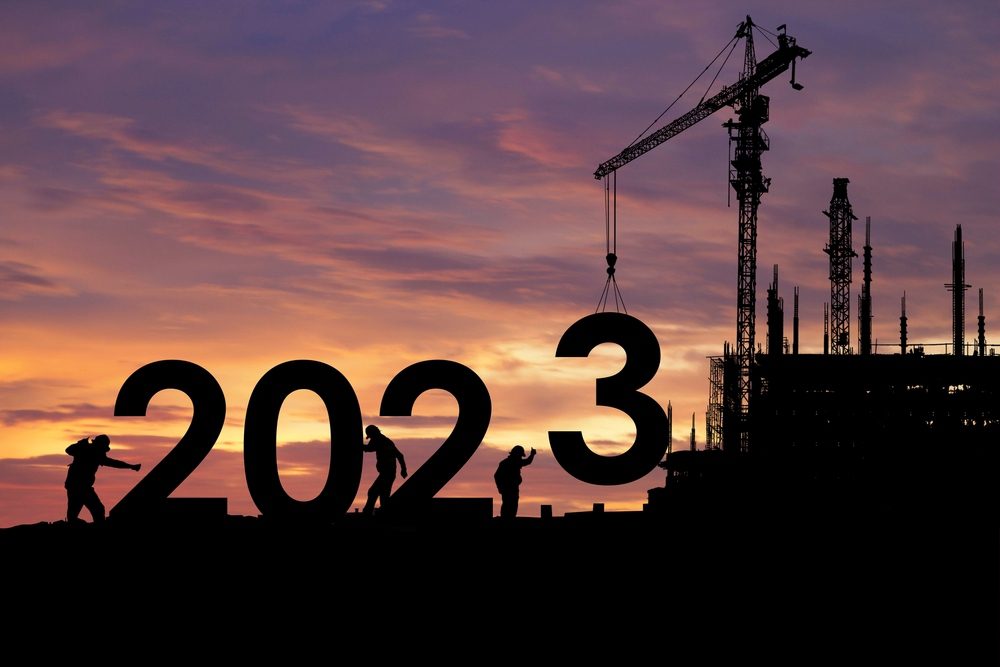 From ESG to robotics, skills and the workplace, we delve into digital construction trends set to reshape the sector in 2023

It is a year which saw real moves to solve the cladding crisis, heatwaves hit infrastructure and deluges submerge parts of London.

However in many ways 2022 marked a year when a sense of normality began returning to the construction sector, with the relaxing of onerous Covid restrictions, and change quickened pace in many areas.

As the new year dawns, 2023 looks set to be a continuation of the common theme – old familiar work habits continuing alongside the acceleration of transformative, digital ways of working.

One manufacturer which has begun to make inroads into the sector is Boston Dynamics, who showcased their robot dog at Digital Construction Week in 2021.

Fast forward 12 months and Tier One contractor Mace has utilised the robot to help it deliver aspects of its infrastructure work.

Dubbed “Dave”, the robot has been deployed to Heathrow to work on collecting data on ageing mechanical and electrical services to bring them into compliance with new regulations.

According to Mace’s chief executive Mark Reynold’s the utilisation of Dave will bring greater efficiencies, stating it will “drive greater efficiency, capture records digitally and improve safety and delivery”.

Efficiency savings lie at the heart of what can tip some contractors towards a genuinely 21st-century construction offering.

John Ryan, co-founder and chief executive of tech firm SymTerra, says that there will undoubtedly be winners and losers when it comes to new contracts.

“You will find that some people will be forward-looking and others will be dragged along with the flow,” he says.

“You are going to see some people who fail to win a tender because they only have word documents on a sharepoint as their systems. You want to be keeping up with those who have digital adoption as their core focus.”

According to Ryan, clients will also begin to demand more from their construction teams.

“People don’t want a dashboard which is updated once a month based on information from six weeks ago. They want what is actually happening in the field right now. It is that focus which will push the tech adopters further, and win more business.”

Digital forms of engagement are recognised as industry best-practice and are fast becoming the norm on major infrastructure project planning and delivery,” says Ross Stewart, digital lead, environment at Aecom.

Stewart notes that the process of creating, sharing and accessing information between projects and stakeholders is changing. “Posting content online does not necessarily make it accessible,” he adds.

One area which could see more activity is the realm of the digital twin.

“Digital twins are useful for anyone who has anything to do with buildings, at any stage,” says Matt Lacey, managing director of Survey Tech. “There are certain buzzwords that periodically pass around the industry […] but I think the Digital Twin concept is here to stay. The reason is that it’s easy to understand, and it’s useful. Fundamentally a digital twin is just a digital copy of something.”

Lacey isn’t the only industry professional predicting the rise in use of digital twins. Mar Zumaquero, global innovation management director at Arcadis told Build in Digital that the concept is beginning to spread more widely across the sector.

“Digital Twins are increasingly being used more widely across our industry, allowing us to develop and test new use cases to understand how to derive the most value from data to impact KPI’s positively across multiple sectors – from transportation to energy, water, and many others,” she says.

“Innovations such as this will increasingly be driven by pressing client needs, but at the same time we need to keep a close eye on the emerging trends and technologies that have the most potential to disrupt our industry.”

Zumaquero says that as the global economy tightens in the coming year the sector is also increasingly likely to turn to both technology and other measures to help protect itself from risks posed by both lower revenues and increasingly acute shortage of skilled construction workers.

The ESG agenda will also play a role in driving an innovation agenda.

“ESG has come a long way in the past year. The most important step has been demystifying what the term actually means,” says Nancy Wood, associate director of sustainability and physics at consultant Buro Happold.

“The industry is getting there, but there are still challenges. For instance, there is no universal industry guide for going beyond the bare minimum environmental requirements. Nor is there a clear methodology for realising the important “S” and “G” components that mustn’t be overlooked in favour of a focus on environmental performance.”

One recent example can be found in London’s cluster of tall buildings, whose ever-changing silhouette arguably also includes the latest in ESG-trends.

This month architects SOM released rejigged plans for its Diamond skyscraper in the City of London growing demand for low carbon office space.

The 260m tall tower was initially approved only four years ago, however the design team felt that the scheme had already “fallen behind” modern standards.

Changes include adding vertical strip air vents and a steel facade to reduce energy use. Small changes in floor height have also allowed an additional storey to be included within the structure without adding to the overall height.

The main impact of the changes is the inclusion of ambient temperatures to help regulate buildings, a feature which may gain in prominence in 2023 as developers scrutinise the energy use of their buildings more closely.

Infrastructure: in the Digital Spotlight?

Infrastructure is another area which has begun to reassess how it can innovate over the coming decade. In September the Construction Leadership Council published a new strategy aimed at improving innovation in construction.

A report in December from the Institution of Civil Engineers (ICE) said that when it comes to infrastructure UK engineers will need to upskill in areas relating to hydrogen, floating offshore wind, heat pumps and community-level renewable schemes.

READ: Eight energy megaprojects under construction in the UK

The new skills will be needed not only to implement the project but help inform policy makers on how to reach the right decisions.

The ICE’s data and digital community advisory board said: “digital twins, robotics, artificial intelligence and virtual reality are already here and can bring significant benefits”. The advisory board called for a national strategy for digitalisation of the built environment.

The 2020’s has also seen radical changes in the workplace, with construction not left unchanged by the work from home revolution. Sites which had to operate under Covid-19 restrictions innovated by allowing inspectors to check progress remotely using video links.

However the change in working culture has also led to conflict at times between employers and employees, especially when it comes to monitoring work undertaken from home.

SymTerra’s John Ryan says that employees may begin to challenge the legality of some of the counter-measures put in place by some employers to monitor those working from home.

In terms of construction firms, Ryan believes that contractors who aren’t able to show evidence that they’ve kept up with the pace of change in terms of digital innovation could lose out.

The Building Safety Act: is 2023 the year reforms will begin to bite?

Finally, the built environment will begin to grapple with the implications of the Building Safety Act in 2023. One major aspect of the new legislation is the retrospective implementation of liability for defects on buildings dating back to 1992. The new 30-year rule has impacts on both contractors and developers and could open the door to a round of litigation as cases come forward.

Essentially, the period for which claims can be made against defective buildings has been extended from 12 years to 30. Though the claims are limited to residential developments built before June 2022. The main aim of the new laws is to fix issues bought up by the cladding crisis.

Ryan believes that this issue will begin to play out in 2023. “Because of the way the legal system works in this country is case based law, we need something or someone to push ‘what is the golden thread?” he says.

“Guidance is still to come out [on the BSA stipulations] but the companies that set the scene and grounds that digital first record management golden thread typing through their supply chain on a project will be ahead of the game when it comes to tenders going forward.”

Read next: 10 contech startups to watch this year