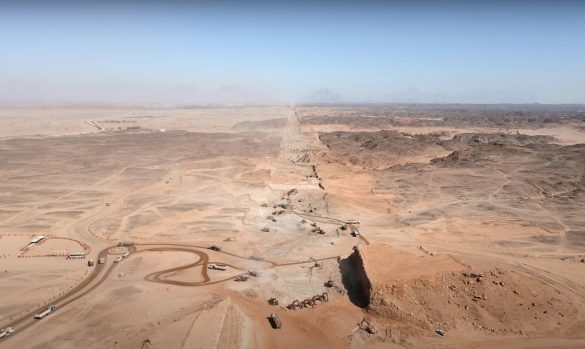 Newly released drone footage reveals that Saudi Arabia has starting building The Line, a planned 170km-long mirrored skyscraper that would be the world’s largest structure once complete.

The video shows numerous excavators at work and building a wide trench in the middle of the Saudi Arabian desert inside which the foundation of the linear city will be laid.

The footage comes just three months since detailed plans for The Line were unveiled.

The structure will be comprised of two glass reflective buildings measuring up to 488 metres (1,600 ft) high, running parallel for 170 kilometres across coastal, mountain and desert terrain.

The project is expected to cost a whopping $1 trillion upon completion, and is projected to house five million people who will be able to travel end-to-end in 20 minutes.

The Line is the epicentre of Crown Prince and de facto ruler Mohammed bin Salman’s smart city project called Neom, which will cost another $500bn to build and is the size of the US state of Massachusetts.

Soon after the plans for The Line were unveiled, the plausible hurdles in the execution of the project were brought to the fore. These included the availability of groundwater for residents of these skyscrapers and the impacts on the environment, particularly for migratory birds.

Moreover, as spotlighted by the New York Times, local tribesman are being forcibly evicted to make way for the Neom development. Just last week, three members of a tribe were allegedly executed for opposing eviction from the construction site, Dezeen reported.

While the deadline to build Neom is 2030, the Wall Street Journal reported that an initial impact assessment of The Line produced in January 2021 said the development would have to be constructed in stages, and could take 50 years to complete.