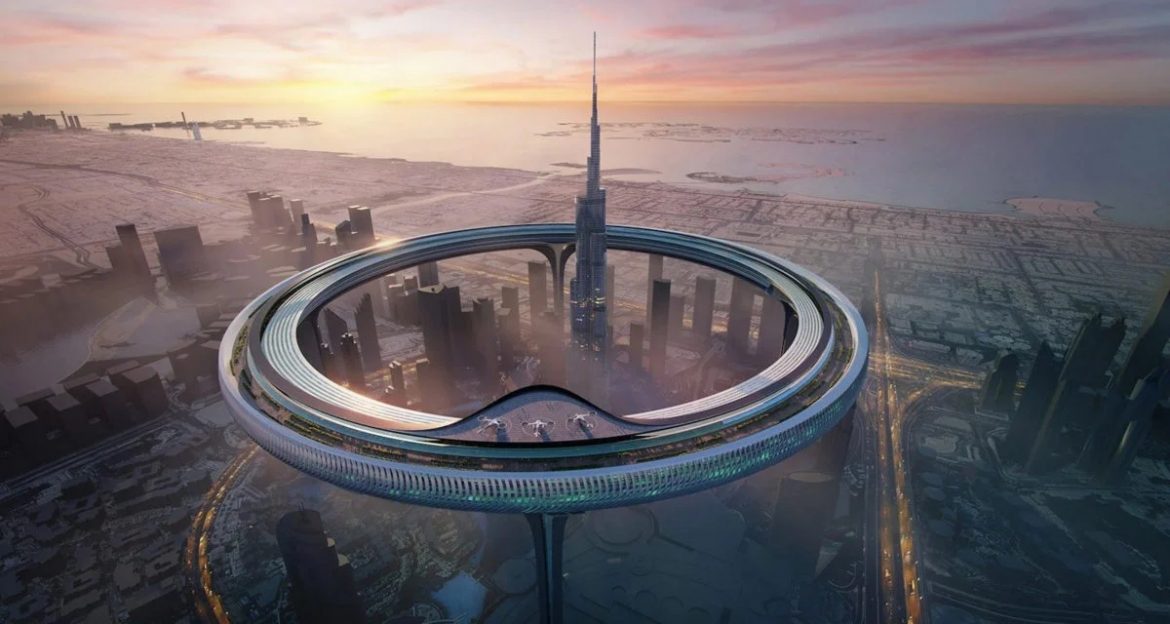 Dubai-based architecture firm Znera Space has unveiled designs for a 550-metre tall structure that would completely encircle the Burj Khalifa, the world’s tallest building. The proposed structure would have a circumference of three kilometres.

The ring would be supported by five vertical beams or columns, and would be composed of two main rings held together by a continuous green belt named the Skypark.

A fleet of suspended peripheral pods would transport passengers from one node to another in the Downtown Circle. Delivery services would operate a special pad for drones.

“Like what we see with The Line in Neom, Saudi Arabia, the Downtown Circle is meant to trigger emotions among those who see the designs. We want it to start a conversation about modern architectural possibilities,” explained Znera Space co-founder, Najmus Chowdhry.

“Different natural scenarios and climates are recreated inside the continuous Skypark,” said Znera Space on its Instagram page.

“Visitors can experience the canyons, sandy dunes and plants from various floras. Swamps, waterfalls and tropical vegetation or the digital caves, cascades, fruit trees and flowers of various hues and species together enrich the green ecosystem,” the post added.

The design for Downtown Circle was originally an entry in a design competition launched by the Dubai Future Foundation.

“We submitted the design two years ago and were told that our design has been shortlisted. However, since it’s been a while since we heard back from them, we decided to release the illustrations,” said Chowdhry.

Znera Space is not new to creating radical design concepts. The duo’s Smog Project, a network of giant towers that would absorb pollution and recycle it into breathable air, was shortlisted for the Experimental Future Project of the year award 2018 at the World Architecture Festival.