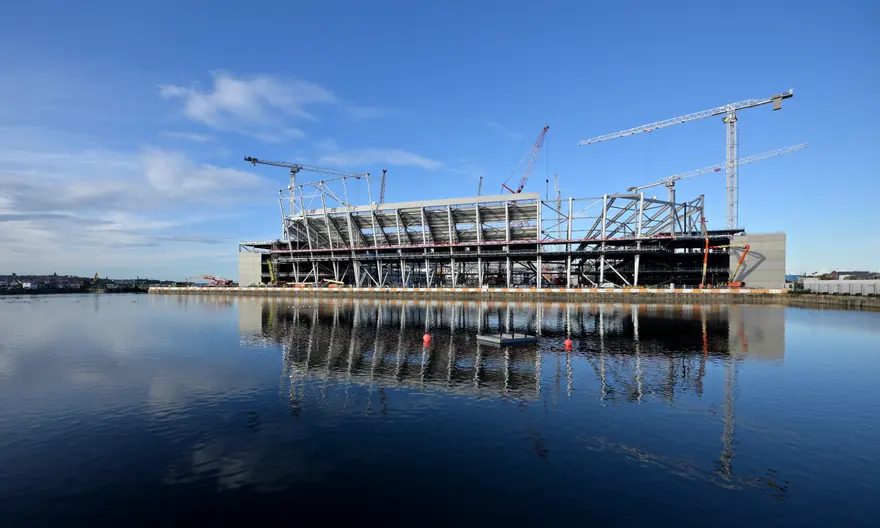 The 100-tonne steelwork section was lifted into place in the north stand, starting a series of lifts over the coming weeks at both ends of the stadium that will offer a first view of its full height of just under 45 metres.

In total, Everton Stadium will have five roof trusses installed; two in the smaller north stand and three atop the one-tier south stand that will eventually house 13,000 spectators.

Each truss, which initially rest on temporary support trestles built into the stand, consists of three sections assembled at ground level and lifted into placed individually. Each of those 15 steelwork sections weighs approximately 100 tonnes.

The completed roof trusses will have clear spans of between 150 and 175 m, once the temporary support trestles are removed. The depth of the trusses varies between 4 m deep at the supports, to around 11.5m at mid-span.

Everton Football Club unveiled in September that the 52,888-seater stadium had already been completed in digital form.

Digital engineer Craig Wallace said at the time: “We like to think we have already built Everton Stadium. It’s been built virtually on screen in a simulated environment, and now physically on site.

“The real benefit is that this enables us to resolve issues upfront, in a simulated environment, before work begins on-site. That promotes efficiency gains, reduction in risks, leads to programme and cost benefits and provides certainty throughout the life-cycle of the build.

“It took some teamwork to pull together and it’s a real collaborative effort, in that our entire supply chain contribute to the model. All of the different disciplines, such as electrical, mechanical, structural and architectural, develop their own 3D model, involving their scope of work, and then share them with us on a collaborative online platform. That provides us with around 1,500 shared model files, which we then combine into a master model for the entire team to use.

“From that, the entire project team can work to co-ordinate the build and ensure there are no clashes within the disciplines.”

Everton’s new stadium at Bramley-Moore Dock is recognised as the largest single-site private sector development in the country.

Laing O’Rourke began construction in July 2021 and is expected to complete by 2025.