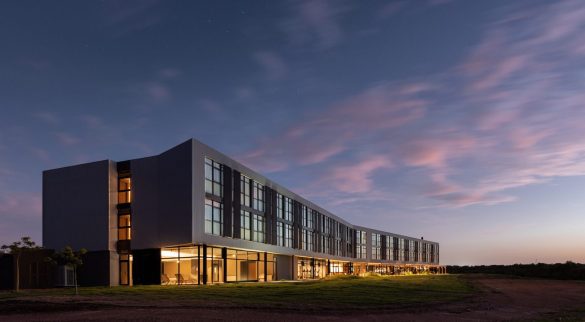 US-based startup Vantem has announced plans to build 15 factories in the US over the next seven years – each capable of producing a million sq.ft of homes per year.

The expansion is fuelled by a Series A investment from Bill Gates-backed Breakthrough Energy Ventures, announced Thursday.

Vantem says its system has already been deployed in over three million sq.ft of living space internationally, including Uruguay (pictured), Brazil, Bolivia, Chile, Colombia, and the Caribbean.

Vantem CEO, Chris Anderson, said: “We are excited to have the support of investors who share in our goal of meeting affordable housing needs while reducing energy and carbon emissions impacts.

“Construction in this sector has seen the least amount of innovation and productivity gains and is one of the greatest direct and indirect sources of carbon emissions.

“At the same time, affordable housing is a global need that must be addressed, but if we build with traditional methods, we will solve one problem only to worsen another. At Vantem, we are committed to addressing both challenges on a global scale.”

Vantem establishes its factories as joint ventures with developers that seek to reduce costs, construction time, and the carbon footprint of their developments, including building affordable net-zero energy structures.

The company says that the strength and resiliency of its housebuilding system is well-suited for a wide range of regions and climates, including extreme hot and cold, wet tropical, dry desert, high hurricane, and seismic zones. Made from refractory materials, the system is also fire resistant.

“With their proven track record in South America and the Caribbean, we’re confident that the Vantem team can scale their modular approach to ensure homes everywhere can be energy efficient.”

Financial details of the Series A round were not disclosed.