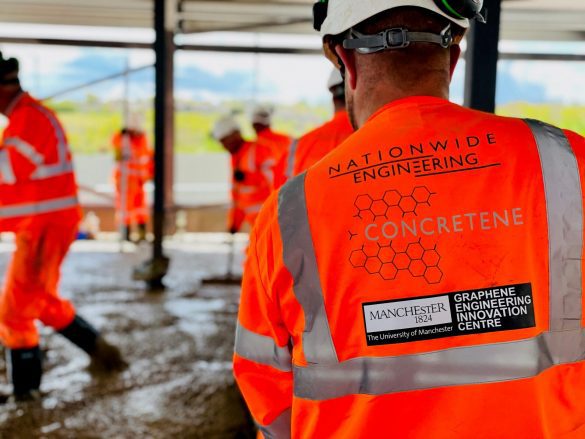 Together with the Graphene Engineering Innovation Centre (GEIC) at The University of Manchester, NERD developed Concretene with the goal of creating a stronger, more sustainable alternative to traditional concrete.

The company did this by adding a graphene formulation into the hydration process of concrete development.

Liquid concrete sets into its solid form through chemical reactions known as hydration and gelation, where the water and cement in the mixture react to form a paste that dries and hardens over time.

Graphene makes a difference by acting as a mechanical support and as a catalyst surface for the initial hydration reaction, leading to better bonding at microscopic scale and giving the finished product improved strength, durability and corrosion resistance.

Results show that when deployed on active construction projects Concretene was as much as 30-50% stronger than standard concrete and reduced carbon emissions by up to 30%.

The good news is that it can be used just like standard concrete, meaning no new equipment or training is needed in the batching or laying process, and cost-savings can be passed directly to the client, NERD said.

“From the outset, it was clear that Concretene had to be non-disruptive and align with existing codes and standards. Using revolutionary nanomaterial technology, developed with our partners at the GEIC, we have been able to create a brilliant new material product that is easy for the industry to adopt.”

Robin Klein, co-founder of venture capital firm LocalGlobe, which led the funding round, commented: “Graphene offers huge potential across industry and with Concretene, the teams at Nationwide Engineering and GEIC have unlocked this potential in a way that could transform construction and physical infrastructure.”

The GEIC has seen graphene-enhanced Concretene used for the floor of a new gym in Amesbury, Wiltshire. The additional properties gained by engineering graphene into the concrete meant that the builders were able to eliminate the need for steel reinforcement in the floor slab, saving on both the price of the steel itself but also the associated labour in laying it.

The company says it has more than 50 clients across transport, construction, energy, and government bodies have signed up to use Concretene for upcoming projects.