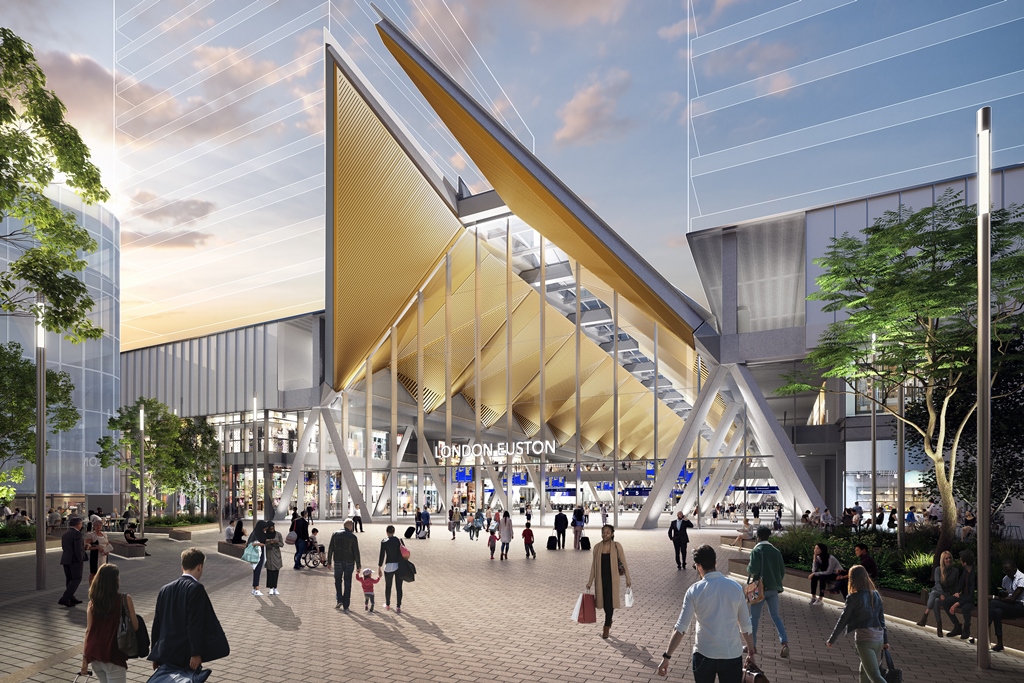 HS2 Ltd has unveiled revised designs for its London terminal in Euston. The designs, updated from 2015, are based on a less complex, 10-platform station that can now be built in a single phase.

They have been drawn up by a design consortium of Arup, WSP and Grimshaw Architects, working with main contractor Mace Dragados JV.

Elements of the roof are designed to be prefabricated off site, and installed using modular construction techniques to reduce cost and local disruption.

The HS2 station will be set across three levels, with ten 450-metre long underground platforms, which will at peak operation will be used by up to 17 HS2 trains per hour.

The ground-level concourse will be 300-metres long and open out onto new public spaces at the north and south. The station hall will be the largest station concourse in the UK.

Declan McCafferty, partner at Grimshaw, said: “The scale of the new HS2 London Euston station means we have the opportunity to create a new truly public civic space for London, a place that responds to transport and passenger needs and becomes part of the existing urban fabric and community.”

Taking account of the recommendations of the 2020 Oakervee review, the design integrates the HS2 station with the existing Network Rail station and emerging plans for over site development.

Network Rail is creating plans to redevelop and integrate the existing Euston station, serving the West Coast mainline, alongside the HS2 terminus. Together, these two stations will offer improved connectivity to the midlands and northwest UK.

Laurence Whitbourn, Euston area client director at HS2 Ltd, said: “HS2’s London Euston station is one of the most complex parts of the HS2 route, situated in a densely populated residential area and adjacent to a busy operational railway.

“HS2 Ltd is absolutely committed to getting Euston right, engaging with the local community and stakeholders as we continue to progress our designs.

“With the arrival of HS2, Euston is fast becoming one of the largest transport-led regeneration projects of the 21st Century.”