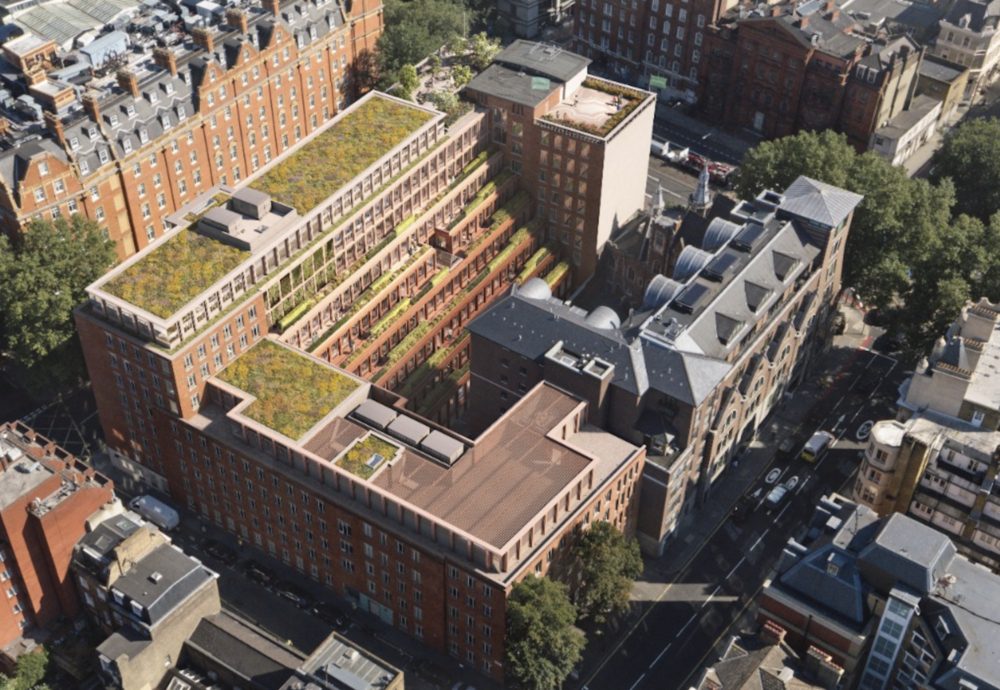 ISG has won a £50m project to redevelop the old Woolworths headquarters in London’s West End.

The scheme, designed by AHMM, developed for General Projects, and backed by lead investor Henderson Park, will raise the building’s gross area by 40% to over 236,000 sq ft.

Woolworths was one of the UK’s biggest high street retailers before it collapsed in 2008. Its old eight-storey headquarters at 242 Marylebone Road in London’s West End will now be renamed Metropolis once the overhaul is complete.

After the refurbishment it will have external green roof terraces across every floor, with more than 6,000 sq ft of gardens.

To achieve this, contractor ISG will infill the existing courtyard area up to the seventh floor, providing tiered planted terraces, and extend the structure with various additions across floors three to eight using a steel frame with cross laminated timber (CLT) slabs.

In addition, the existing roof plant enclosures will be removed and consolidated, allowing the creation of rooftop office pavilions on level five and eight.

AHMM has designed the scheme to give the building an BREEAM rating of ‘outstanding’.

The use of engineered timber floors to all building extensions has reduced embodied carbon, equating to a 73% improvement against RIBA 2030 targets.

The masonry facades, concrete frame, and cores will also be retained while cross laminated timber will be used for all new floors forming the building’s extension.

Careful retention of existing building material will result in over 4,500 tonnes of carbon saved during the construction process and diverted from landfill.

Jim Knowlton, ISG project director, said: “Originally constructed in the 1950s, Woolworth House is an exemplar of how a low carbon approach can transform our cities’ dated building stock.

“Following the successful completion of 66 Shoe Lane in 2020, Woolworth House is our second collaboration with Henderson Park. The project builds upon the success, expertise and shared learnings of the same delivery team, now applied to this trailblazing low carbon scheme.”