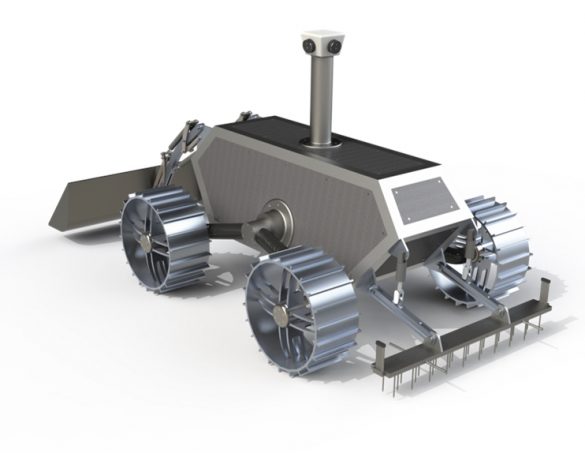 Lunar Outpost and the Center for Space Resources at Colorado School of Mines have been selected by NASA to help develop technology for autonomous excavation and construction on the Moon.

The Autonomous Site Preparation: Excavation, Compaction and Testing (ASPECT) project will become part of NASA’s Lunar Surface Technology Research (LuSTR) programme, one of only three university-led projects to be selected by NASA to develop technologies for living and working on the Moon.

The ultimate goal of the project is the autonomous creation of a safe and efficient lunar landing site.

This will be achieved by preparing the lunar surface through the relocation of rocks, moving of regolith and leveling, grading and compaction of the site to support construction of a landing pad for a large lunar lander.

Colorado School of Mines, the world’s leading university in the use of space resources to enhance humanity’s presence in space, is leading the ASPECT project in collaboration with Lunar Outpost, Michigan Technological University, and Bechtel.

Lunar Outpost is providing the project’s Rover Mobility Element based on its spaceflight-ready line of MAPP lunar rovers and HOUND terrestrial autonomous robots.

‘Sets stage for the future’

AJ Gemer, chief technology officer of Lunar Outpost, said: “LuSTR sets the stage for the future of frequent, large-scale lunar surface operations that will one day support the NASA Artemis missions, while simultaneously developing technologies useful around the Solar System – the Moon, Mars, and even extreme environments here on Earth.

“As the leading spaceflight mobility provider, Lunar Outpost holds the expertise, capabilities, and relationships necessary to provide autonomous robotics for a wide range of extreme environment mobility needs, both on Earth and in space.

“As the cadence of lunar missions increases over the next decade, Lunar Outpost will leverage our leading planetary mobility platforms to provide lunar infrastructure operations, servicing, and maintenance as services to commercial and government operations.”

The aim of early lunar-site preparation is to minimise human planning and intervention on the Moon and to maximize the safety of the Artemis missions.

The ASPECT project will ensure the safety of the Artemis mission landings while also demonstrating an application of Lunar Outpost’s dual-use technologies that provide value both in space and on Earth.

The Earth analog to the ASPECT rover, known as HOUND, is utilised in industrial applications for a variety of industries, including oil and gas, construction, and defense.

For this project, Lunar Outpost is leveraging expertise in dust mitigation and thermal technologies from the development of its line of MAPP rovers to deliver a Rover Mobility Element that will support the ASPECT lunar excavation and construction tools.

The university is home to the Space Resources Graduate Program, the first programme in the world focused on how to locate, access, use, and develop the resources beyond Earth.

Michigan Tech will provide the compaction mechanism and invaluable modeling expertise to analyse and validate the properties of the landing pad and demonstration.

Betchel will provide a subscale vacuum test that will mimic the eventual function of ASPECT on the Moon.

The ASPECT project will culminate in a terrestrial demonstration of the autonomous construction of a future lunar landing pad on the Mines campus in Golden, Colorado.

Read next: Mixed-use building in Albania to take form of national hero