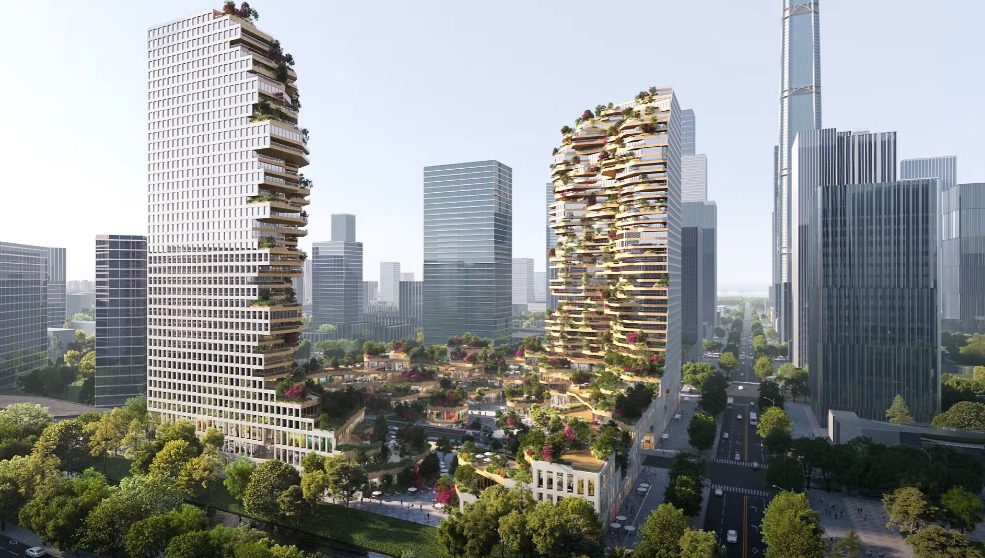 Dutch architecture firm MVRDV has won an international competition to lead a new mixed-use development in the growing Chinese city of Nanjing.

The historic city has been expanding rapidly since 2015 to become China’s 10th largest economic producer in terms of overall GDP.

In a press release, MVRDV says its contribution to Nanjing’s financial centre would create a valuable new green space that also contributes to the biodiversity and cooling of the site. It will also feature a connection to the surrounding commercial plots and metro station, along with a new three-floor commercial area.

According to the firm the project spans two adjacent blocks on the edge of the Jiangbei Financial District master plan.

The project’s two L-shaped towers, each 40 stories in height, face each other from the north and south corners, while the podium of 3–4 stories forms a perimeter that encloses almost the entire site to create the protective environment at its heart.

Winy Maas, founding partner and principal architect at MVRDV, said: “The contemporary architecture of Nanjing takes its inspiration from nature in form and appearance.

“With Oasis Towers we wanted to push this trend to the max — not only emulating nature with curving, stratified ‘cliffs’ but also to literally incorporate nature into the design with the greenery and by tapping into natural processes.”

The towers are said to be oriented towards the west in order to leverage the wind direction in order to maximise ventilation. Heat pumps and the arrangement of the balconies further aid in energy conservation and the reduction of solar gains in the summer. The upper floors will be divided into smaller residential units.

MVRDV says it is still working with the client on the design and development of the site and that a construction estimate will be released at a yet-undetermined date and time.