Home » Over 1,000 jobs to be created by landmark HS2 station in Birmingham

Over 1,000 jobs to be created by landmark HS2 station in Birmingham 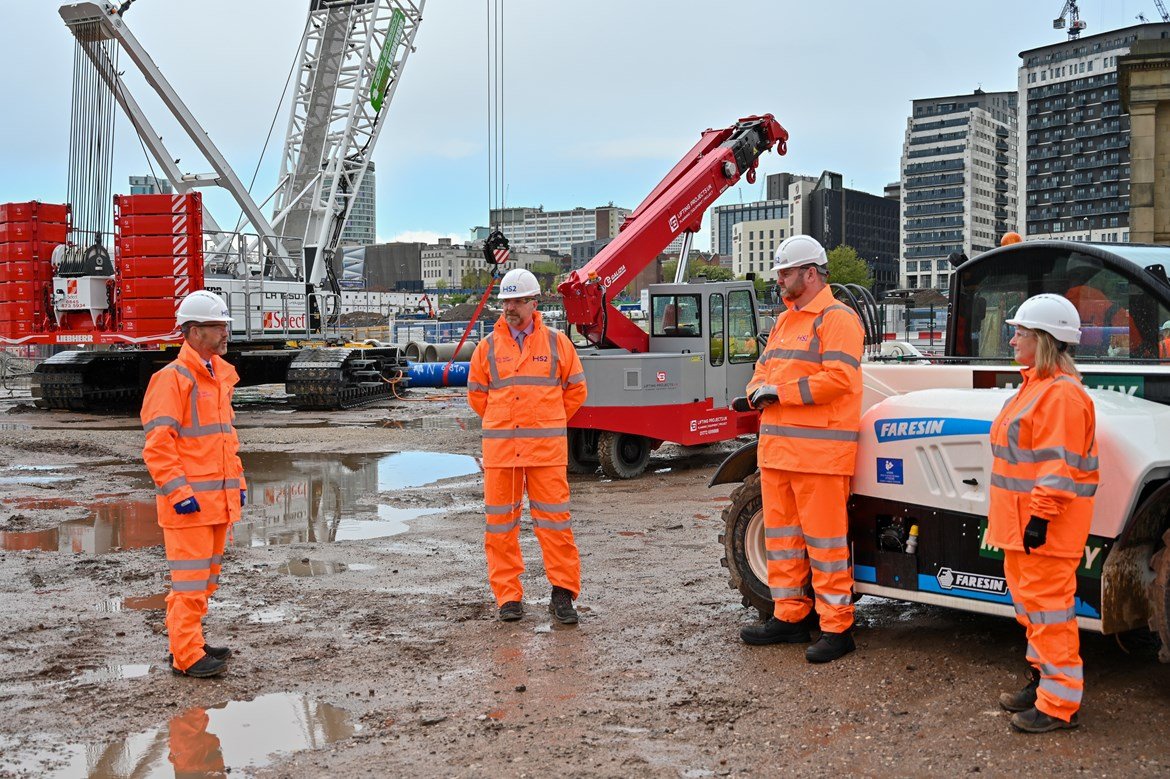 HS2 Ltd and HS2 Minister Andrew Stephenson MP have confirmed that over 1,000 jobs will be created by the joint venture that will build HS2’s landmark station in the centre of Birmingham.

Following the visit to HS2’s Curzon Street Station by newly re-elected West Midlands Mayor Andy Street last week, HS2 Ltd and Mace Dragados have formally signed the station contract, signalling the start of a project that will bring significant jobs and skills opportunities for people in the West Midlands region. These include an estimated 100 new entrant roles and 100 new apprenticeship positions and Restart scheme opportunities for unemployed people.

With the city soon to introduce a Clean Air Zone, the innovations on show, including the world’s first battery-powered crawler crane, eco-hybrid trucks, an electric sweeper, a generator powered by hydrogenated vegetable oil, solar-powered generators and recycled curbing and sustainable asphalt, will help cut carbon emissions on the Curzon Street site as well as other HS2 sites between London and Birmingham.

HS2 Minister Andrew Stephenson said: “This brand new HS2 station marks a huge investment in Birmingham and is a major milestone in the Government’s plan to build back better from Covid-19.

“As well as being net zero carbon in operation, Birmingham Curzon Street will create over 1000 new jobs and 100 new apprenticeships. The station will make the city the beating heart of HS2 and the gateway to the North, forging better connections across the whole country.”

Mace Dragados has confirmed that a whole range of jobs will be supported, including roles in environmental management, community engagement and health, safety and wellbeing roles, as well as a number of more traditional construction roles. The contract also opens up opportunities for supply chain companies in the region, with 40% of project spend set to go towards SMEs.

HS2’s senior project manager for Curzon Street Station Nicola Henderson-Reid said: “It’s fantastic to formally sign this contract, which will deliver over a thousand jobs and create numerous opportunities for local businesses to be part of the HS2 supply chain.

“As we’ve seen today, not only is HS2 playing a critical role creating jobs and contracts, the project is also committed to building the new railway in the most sustainable way possible. The green technology on show in Birmingham today places HS2 at the forefront of the UK ambition to reduce carbon emissions in the construction industry.”

A consortium has been working on the design of the station for the last three years, including lead consultant WSP, Grimshaw as building architect, and Grants Associates as landscape and public realm lead. With Mace Dragados now on board, the detailed design of the station will be finalised before construction begins and the station takes shape over the next few years.

Jason Millett, Mace Group board director, representing the Mace Dragados Joint Venture, said: “On behalf of both Dragados and Mace, I am honoured that HS2 have chosen us to build the new station at Curzon Street. This is the kind of opportunity that comes along once in a generation – to deliver a transformational project that will leave a huge legacy for the UK, Birmingham and the West Midlands.

“We are extremely proud and delighted to have been selected for such an important role, and we look forward to working with HS2 and stakeholders to bring their ambitious vision to life.”

At the heart of the high-speed network, the new HS2 station in Birmingham has been designed to allow for future improvements to the public space to ensure inclusive, seamless transport connections for local people, provide opportunities for retail and commercial development, and help drive local investment and regeneration.

The station is set to reduce carbon emissions by 55%, will achieve net zero carbon emissions from regulated energy consumption and use a range of technologies to generate energy from renewable sources. The design has achieved the BREEAM Excellent rating.