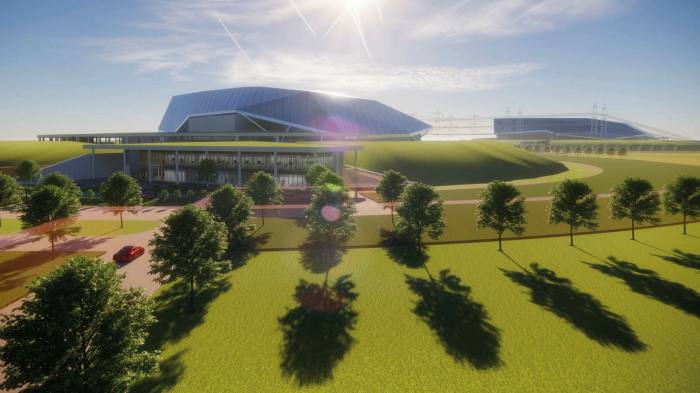 The UKSMR consortium has revealed the latest design of its proposed low-cost, factory-built nuclear power station.

Led by Rolls-Royce, the consortium’s plans for the small modular reactor (SMR) features a design influenced by modular development and construction methods, which will ensure power station components can be manufactured in a factory and assembled on site.

Consortium partner Atkins led the civil, structural, and architectural design for the power station – which features a refreshed faceted aesthetic roof, a surrounding earth berm integrated with the surrounding landscape, and a compact building footprint.

The consortium is working with its partners and UK Research and Innovation to secure a fleet of factory-built nuclear power stations, each one supplying 470MW of electricity.

Significant exports are also being sought.

Commenting on the plans, Peter Sell – chief design engineer, UKSMR at Atkins – said: “As a consortium, we’re seeking to refresh the image of the energy sector with a contemporary and sustainable design that takes pride in its aesthetics and environmental awareness, while supporting delivery of ambitious net zero commitments.”

Andy Crabb, architect and associate director, added: “The apparently simple design cloaks a multitude of modular facilities below a skyline of folded architectural planes that rise above an encircling ground form modelled from the site itself.

“The iconic profile engages with the sky and the earthworks with the ground, together enshrouding a new modular thinking in the design of a new power for the future.”

“To do this it must be affordable, reliable, and investable; and the way we manufacture and assemble our power station brings down its costs to be comparable with offshore wind at around £50 per megawatt-hour.

“As we reach the end of our first phase, I’m proud that our team has designed a product that can be commoditised to provide the scale required to be a key part of the world’s decarbonisation efforts.

“We are ready to go and hope to be first in line to start the rigorous Generic Design Assessment process in the autumn of this year.”

The UKSMR is hoping for the first design to be assessed by regulators in the autumn, which will keep it on schedule to finish its first unit in the early 2030s and build up to 10 units by 2035.

Read next: Bridge structures shifted into place at Hexham junction in Northumberland