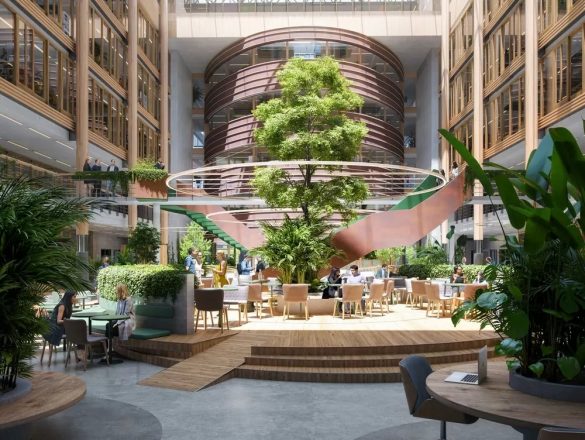 Real estate developer EDGE has committed to a 50% cut in carbon emissions of all newly announced projects going forward, as it moves towards absolute zero carbon.

It said its ultimate goal is to reduce all Scope 1, 2 and 3 categories of emissions, including the embodied and operational emissions of its buildings to absolute zero by 2050 or earlier.

Edge’s first net zero project will be Edge London Bridge in the UK, to be delivered in 2025.

The developer’s portfolio includes many of the world’s smartest and most sustainable office buildings, including The Edge in Amsterdam (main image), completed in 2014, which was officially recognised as the greenest, smartest building in the world.

In addition to new developments, Edge’s net zero pledge also covers the corporate emissions of its 140 staff. Edge has laid out its own Edge Net Zero Carbon Pathway – with its commitments backed by the Science Based Targets initiative.

‘The biggest challenge of our time’

The real estate developer’s ambition to reach zero carbon emissions without any requirement for offsetting puts it among a handful of real estate property developers that have made such bold pledges.

“Climate change is the biggest challenge of our time. That’s why we decided 25 years ago that our buildings should be part of the solution rather than the problem,” said Coen van Oostrom, founder and CEO at Edge and real estate industry co-chair at the World Economic Forum.

He added: “By thinking not just about how we build but also how our buildings are used and how we ourselves operate, we can commit to being one of the first property companies to reach net zero and present a clear timetable for achieving zero carbon emissions.

“We believe the real estate industry should be accountable for its actions. We call on our partners, collaborators and innovators in other industries to join us in taking action to build better, greener and for the future.”

Macquarie Asset Management – the world’s largest infrastructure asset manager which has committed to reach Net Zero by 2040 – has recently agreed to acquire a significant minority stake in Edge to drive forward development of greener buildings across Europe.

Alongside the Science Based Targets initiative, Edge’s Net Zero Carbon Pathway, has been developed and aligned with the principles laid out in other carbon frameworks from the UK Green Building Council (UKGBC), World Economic Forum (WEF) and World Business Council for Sustainable Development (WBCSD).

Edge will work closely with partners in all active markets and continue to pioneer new building methods to reduce the reliance on offsetting to zero. These include using renewable materials such as timber, further developing its circular economy principles, materials reuse and recycling, and reliance on renewable energy.

While it is working towards achieving absolute zero carbon emissions, Edge will use high-quality carbon removal schemes in tandem with Compensate, a not-for-profit organisation, which helps businesses to offset while moving towards net zero.

Image: An interior view of The Edge Amsterdam (credit: Plomp)