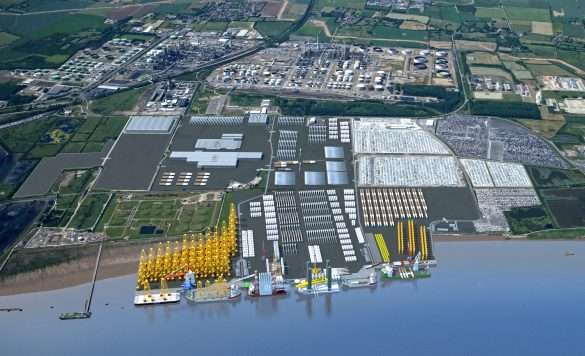 South Korean pipe manufacturer SeAH Wind has confirmed that it will invest up to £300m at Teesworks to build the largest monopile factory in the world.

The manufacturer has purchased a 90-acre piece of land and will start construction of the factory in July. The land sits alongside the South Bank Quay which is currently under construction.

The heavy-lift quay, along the banks of the River Tees, will provide direct access to some of the world’s the biggest wind farms and help position the site as the UK’s premier offshore wind hub.

The monopile factory will form an integral component of the Teesworks offshore wind hub.

The factory is expected to create 750 direct jobs and 1,500 more in the supply chain and during construction.

When fully operational in 2026, it is expected to be able to produce between 100 and 150 monopiles per year.

Joosung Lee, SeAH Steel Holdings chief executive and president, said: “When SeAH confirmed its UK investment, the aim was to contribute to the UK offshore wind industry by working with the UK government.

“We are pleased to take the first yet significant step for this goal in Teesside. We will endeavour to make our factory globally competitive as well as become a good member of the community.”

Ben Houchen, Tees Valley Mayor, said: “2022 is our year of construction and this is another transformational project that places Teesside as the UK lead for clean, green manufacturing.

“Spades will be in the ground for this factory at the beginning of July.

“We’re wasting no time in clearing land and developing schemes like the South Bank Quay, which has proved a massive draw to SeAH as it is for other businesses in the offshore sector.”

Originally SeAH planned to build the factory at the Able Marine Energy Park on the Humber Estuary. It said that due to “business reasons” it has been unable to finalise an agreement for Humberside.

Image: A render of the Teesworks offshore wind hub.