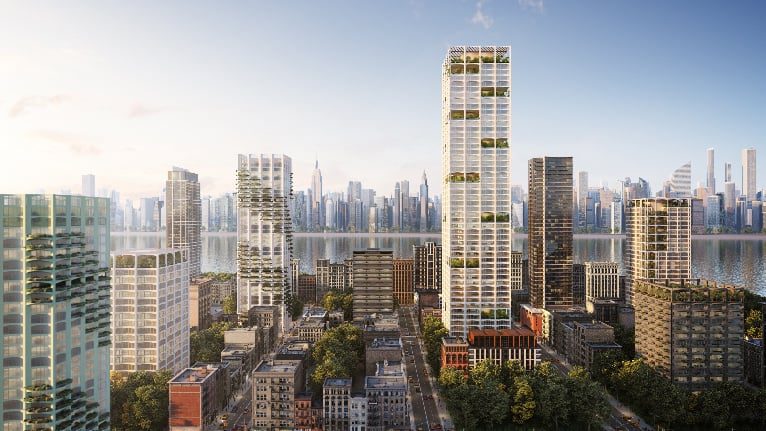 Skidmore, Owings & Merrill (SOM) revealed an update to its Urban Sequoia project this week at the COP27 climate summit in Sharm El-Sheikh, Egypt.

SOM says its design will absorb more than three times the amount of carbon emitted during its construction and operations during the building’s planned 100-year lifecycle.

“We recognise the need to alter the trajectory of climate change by going beyond net zero,” Cooper said during the presentation. “We need to take carbon out of the atmosphere through the built environment, and we have developed a design to do just that.”

SOM’s updated high-rise concept inverts the traditional building process and layout by incorporating its MEP systems into an expanded set of floor slabs.

Each slab would support an underfloor ventilation system underneath its timber floor finish. The ceilings are, therefore, removable, which cuts down on materials usage.

Finally, sky gardens and other capture technologies are embedded into the building’s core and roof, with the ability to be reused in industrial settings elsewhere.

The concept can be adapted to be used in a variety of different building types and leverages the most technically advanced materials — including bioconcrete and solar glass — in order to achieve the “beyond net zero” standard.

Urban Sequoia NOW brings together different strands of sustainable design thinking, the latest innovations, and emerging technologies and reimagines them at the scale of a building, SOM says.

“Urban Sequoia is a systems approach, a philosophy,” the firm’s Sustainability Director, Mina Hasman, said in a press announcement. “It is a way of thinking about cities as ecologies, as living and breathing systems that can be reconfigured to achieve dramatic reductions in whole life carbon, reframing the built environment as a solution for the climate crisis.”