The lay of the land: An interview with Surveytech 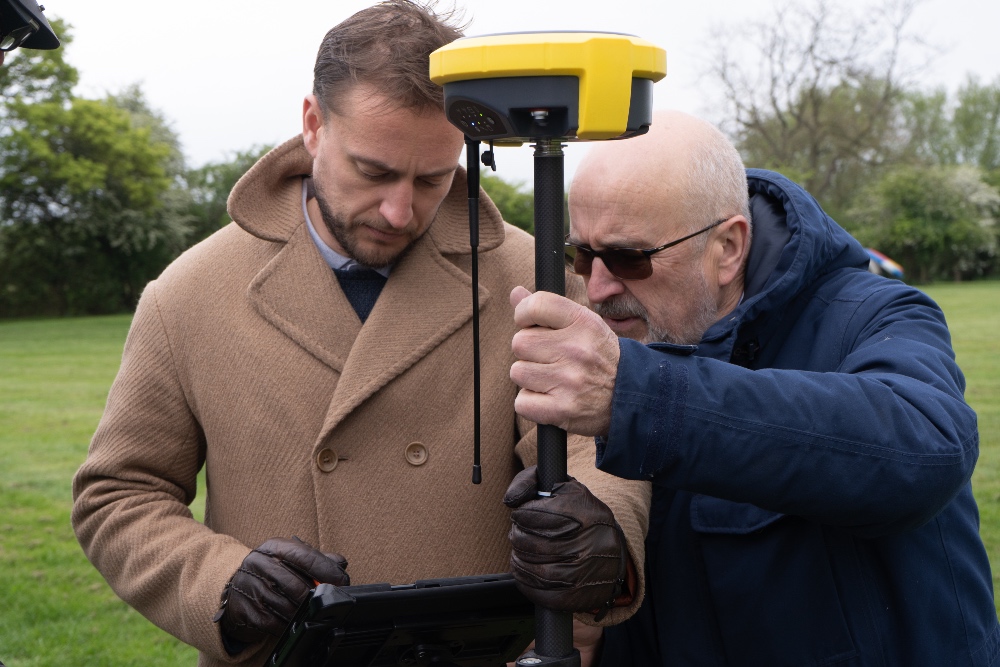 Tim Clark caught up with the father-son owners of surveying firm Surveytech, Tom and Matthew Lacey, to gauge their views on the industry’s attitude toward technology – and how a certain viral ‘Gap Yah’ video produced over a decade ago is paying dividends for the business now

One attends Hollywood film auditions, has an IMDB profile, and is known for roles in BBC sitcoms; the other is a former technical director at a major UK contractor who honed his career in Iraq and the Sudan and conducted surveys for the original Docklands Light Railway.

As owners of South-London-based surveying firm Surveytech, Tom Lacey and his son Matthew find common ground in their mutual passion for surveying.

Build In Digital joined both Laceys on an extended virtual chat to discuss the trials and travails of the surveying world, where they see the market heading, and understanding the importance grounding the latest surveying techniques into the fabric of the construction industry.

Like any father and son relationship, the interview begins with a family disagreement. “He [Tom] is retired when he wants to be. Like now, when he’s in Tenerife,” quips Matt as his dad Tom joins the video call from his brief holiday in the Canary Islands.

“I am retired when I see there’s too much work coming up,” Tom responds.

To be fair to the Lacey senior, he has a right to take a break. He founded Bencombe Hire Services in 1997, which was rebranded to Surveytech in 2015, and has been at the helm of the business for over 20 years. Prior to that, he qualified with an RICS in engineering surveying in 1982 from South Bank Polytechnic. He then worked in Africa and the Middle East before taking on a role as technical director from groundwork contractor O’Halloran & O’Brien, now known as OHOB.

Matt began learning the trade from the age of six, “holding measuring sticks twice my size” on building sites.

Between them, the father-and-son team have seen the profession change beyond all recognition. While Tom has anecdotes about finding due north using the height of the Sun in rural Iraq and traipsing across the UK to locate Trig Pillars, Matt has laser-scanned his own Victorian office just to see how accurate his surveying predecessors were.

However, Matt notes that, despite the technical changes, they are doing essentially the same tasks. “A lot of what we’re doing when we’re speaking to potential clients is asking them well you know, what are you doing?” he says, “and, you know, what do you want to end up with?”

When he isn’t surveying, Matt’s other career is in the world of acting and comedy, with appearances in soap operas such Eastenders. He is best known for playing Ben in the BBC sitcom Cuckoo, which ran for five series between 2012 and 2019 and also as his viral Youtube character Orlando or ‘Gap Yar’, which became a viral video in the early 2010s.

Quantity surveying and character comedy are very rare bedfellows, yet despite the vast differences in the respective professions, Matt has still managed to find connections between the film and surveying worlds.

“I was doing some reading in [auditioning] for the new Men In Black film, and I ended up chatting with the set designer,” he says, as he describes how the film world is now utilising what is effectively surveying techniques to plot out their sets.

“I left my card. I thought to myself, ‘you have to take the opportunity when you can.’”

It is not only the film world – which is not introducing pinpoint laser scanning to set design – that is taking on skills associated with surveying.

“The techniques are different today but essentially we are doing the same thing,” Matt says. “Surveying is getting everywhere: we’ve supplied high-end kitchen fitters who now use laser scans.

“You can change industries, but some skills are transferable and useful. It’s important to get people interested, anyway you can do, that helps with getting people to really want to put in the time to learn new technology.”

As a way to bridge the knowledge gap within the construction sector, Matt lent on skills learnt from his media career to produce a series of Youtube clips for Surveytech that aim to educate construction professionals on new equipment and techniques. The clips, some of which have had over 40,000 views, explain what new technology is available and how it works.

When it comes to new skills, the construction sector is arguably at a transition point, with a whole new array of techniques and technology ready to overhaul the sector. However as with change, it can at times seem glacially slow.

The conversation veers into the types of tools that can be utilised on worksites to survey more effectively, such as matterport cameras to create digital twins of the built environment; GNSS receivers, which can hook up site measurements to a national location grid from very start of work on site; and robotic-tool stations to allow site engineers to work independently.

Matt adds: “You can have a whole worksite on a tablet, with loaded digital models into the machine control to tell diggers where to dig and you can control a whole aspect of a site with one person instead of two. It can halve the manpower needed for certain tasks.”

The tools often feel like the types employed by major contractors for high-value sites, but what is intriguing is how the technology may, if given the opportunity, begin to trickle down into regular use by SMEs.

According to Tom, one area that has seen particular growth in the requirement for accurate surveying is MMC and offsite manufacture.

He says: “The construction industry is going very much down the offsite construction route. That’s where it will demand a high level of technology, even for the on-site element.

“The on-site aspect of MMC is what will knit any project together.”

Any project, be it a housing scheme or larger commercial building will only succeed if the measurements taken at source fit when the MMC building itself actually arrived. On-site fixes are a costly mistake to rectify.

This has fostered a demand for more on-site construction workers to be at least proficient in some form of surveying more than in previous decades, where the professions were much more defined.

From discussing the construction industry with the Surveytech duo, you get the impression that at times the construction sector in its current form exists in two distinctly parallel worlds. One is where Tier One contractors and well resourced consultants forge ahead with latest technology; the other exists further down the supply chain and is populated by construction professionals either haven’t had time to learn new technology or are indifferent to it.

“Some people are still hugely forward thinking, and others are still messing around with outdated equipment because it is what they have always done,” Matt says.

“The key I have found is finding people who have an open-mindedness to listening to good advice.”

Building competence – from the ground up

When it comes to adopting digital technologies and moving construction forward from the decades of low productivity growth, the UK isn’t short of initiatives. Mark Farmer’s 2016 Modernise or Die report on the construction industry was a treatise on what construction firms needed to do.

Despite this, the sector has been stubbornly stuck at lower productivity rates than other industries, leaving successive governments scratching their heads of how to improve the sector.

Tom says that they see first hand how the barriers persist at the smaller SME-end of the construction sector.

He says: “Small firms in the construction supply chain have difficulty in providing sufficient funding to their staff for the high end equipment, whereas if they are slowly introduced to it and benefit from new techniques at the lower end of the market.

“Even the bigger firms had previously struggled with BIM, at first they [construction firms] didn’t understand it. It was a big struggle to get it accepted. For years BIM was rumbling along, it is now but it took years for it to pick up.”

It can be argued that BIM [Building Information Modelling] was spearheaded in part by the UK government with its BIM mandate, put forward by the Construction Industry Council, which meant any centrally procured construction project had to include BIM by 2016.

According to Matt, opportunities to spread new technology need to be widened, so that more of the sector can begin to learn new skills. New mandates for other sectors could, and should, be backed in a similar way to the BIM mandate to allow other technologies to be as widely adopted.

“A lot of people blame equipment, when it’s really their own knowledge”

He says: “Sometimes you have concepts like BIM where people attend lots of conferences to talk about it, but it takes a bit of time for the sector to cope with certain aspects of a new technology – and also get the level of competence to operate it.

“When people hire in equipment and you can try and get up to speed without that first outlay [in expenditure] and second for smaller companies, you can get fully funded training from the CITB [Construction Industry Training Board] and larger companies are partially funded.

“I don’t think people take advantage of this and other options they have. If people do come to buy equipment then there is still the 130% capital allowance, so there are huge tax breaks and grants and opportunities for people to upskill and technologically jump forward.”

There are signs that the industry is bringing this type of training to the fore. In early April, the CITB launched a free mentoring service to help construction companies develop the skills they need to drive digital transformation within their business.

Importantly, this was focussed on SME business owners. The CITB says that the programme aims to “demystify digital tools” to help small businesses better understand what latest producers and working methods are out there.

“It’s in our interests to get construction workers to adopt new technology, and to do it well,” says Matt.

“There’s nothing worse than an engineer who is in above their head saying, oh, the equipment’s rubbish. As a challenger brand, we need them to say, oh, Geomax is great!”

He adds: “A lot of people blame equipment, when it’s really their own knowledge.”

Read next: How National Highways is shaping the construction plant of the future

Reply Retweet Favorite
Hardt Hyperloop and RFI will carry out technical-economic feasibility studies into where hyperloop corridors may be… https://t.co/6KC4Ae98oy

Reply Retweet Favorite
Cambridge engineers have filed a patent and been awarded new research funding for their invention of the world’s fi… https://t.co/ym85CJk7jA