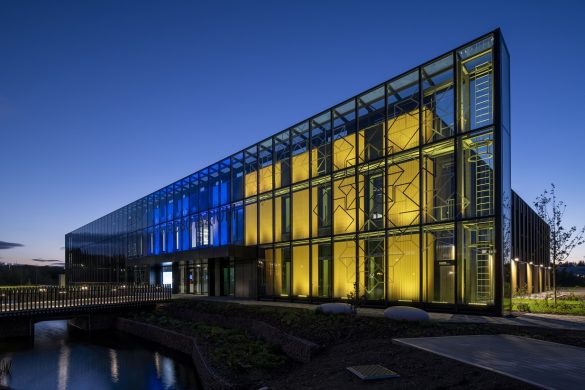 Located on Heriot-Watt University’s Edinburgh campus, in partnership with the University of Edinburgh, the £22.4m facility will be the largest and most advanced applied research facility for robotics and artificial intelligence (AI) in the UK.

The aim is that the new centre will create an “innovation hub” for the practical application of robotics and autonomous systems.

The building’s design focuses on sustainability and energy efficiency. In winter, the intelligent facade will provide solar heat and recycle warm air while a solar PV array is installed on the roof.

The opening event, which took place at the new inaugurated centre on 28 September, gathered leading figures from government, industry, research and the robotics community.

As part of the event, guests were able to experience the some of the state-of-the-art robotic technology that has been installed at the National Robotarium to explore how robots can be used to help different sectors, such as healthcare, construction, manufacturing and offshore energy, work more safely and efficiently.

Demonstrations on the day included socially assistive robots, medical technology for improving cognition, ROVs for underwater 3D mapping and scanning of hazardous environments at sea, companion robots, and a humanoid robot that is being used to better understand the mechanisms and treatment of Parkinson’s Disease.

Stewart Miller, chief executive officer at the National Robotarium, said: “Britain has a long and rich heritage of delivering cutting-edge innovation on the world stage.

“The opening of this dedicated, state-of-the-art facility is another important milestone in that story and one which I believe demonstrates Scotland and the UK’s role at the forefront of global developments in AI and robotics.”

A new partnership between the National Robotarium and Tata Consultancy Services, India’s largest multinational business group, was also announced at the opening.

The two organisations will work together on applied engineering and joint research in areas including soft robotics, field robotics, co-bots and tele-operations in an effort to increase cross-industry collaboration and accelerate the development of robotic solutions from laboratory to market.