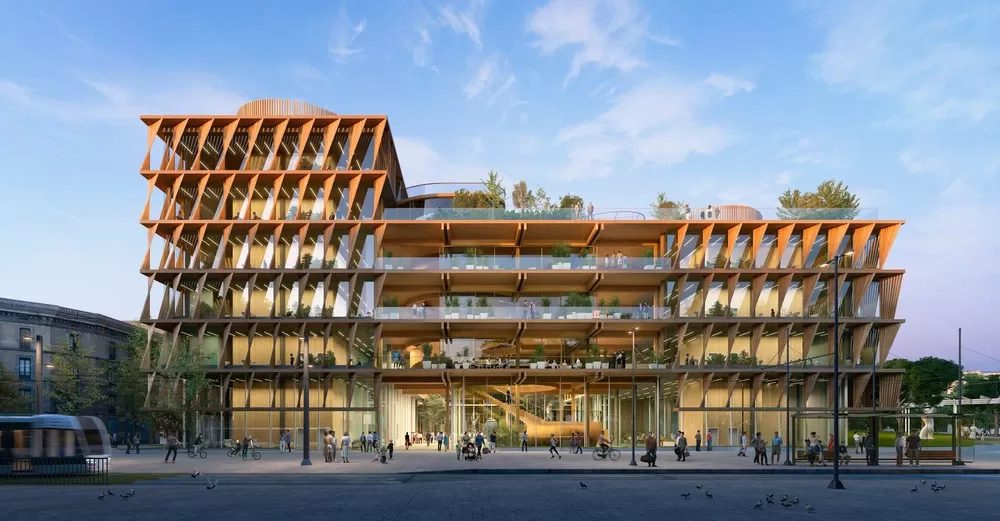 A consortium comprising ZGF Architects and Barcelona-based firms MIRAG and Double Twist have been crowned winners of a competition to design the net-positive Mercat del Peix Research Centre in Barcelona.

The team’s design was one of 41 entries including from notable firms such as Kengo Kuma & Associates and Allies and Morrison.

When operational in 2025, the new laboratory aims to unite global experts to address the world’s most complex and vexing challenges related to the future of our planet, including biodiversity loss and climate change economics and governance.

The scheme is composed of two ‘net-positive’ mass timber buildings connected by a central courtyard.

The taller building, a seven-story ‘wet lab,’ will house the headquarters of the Institut de Biologia Evolutiva, while the smaller five-story ‘dry lab’ will host a range of interdisciplinary projects for Barcelona’s Universitat Pompeu Fabra. When combined, the buildings will provide over 452,000 sq.ft of internal space.

The project’s design strategy was orientated around encouraging interaction between the various research entities in the center itself, and the wider Ciutadella of Knowledge. A resulting series of “nuanced design strategies” were implemented to “quietly promote circulation,” including floor-to-ceiling glass, shared floor-to-ceiling heights across buildings, and shared spaces such as the central courtyard and mass timber spiral staircase that terminates at a large roof deck.

Competition jury president Jaume Casals praised the winning scheme as one which “optimally combines ingenuity in meeting the needs of users” and brings a “brightness and boldness” to the site.

The research centre’s mass timber building envelope and mechanical systems have been designed to reduce embodied and operational carbon.