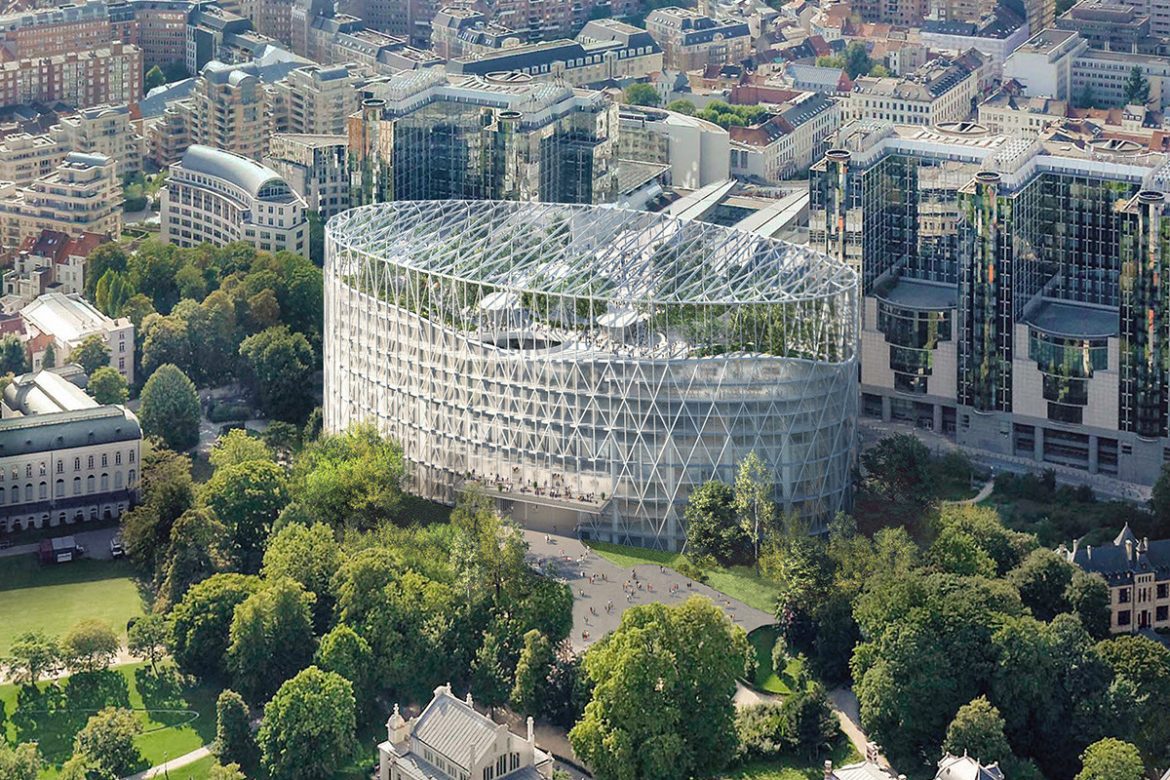 The winning design for a renewed European Parliament building in Brussels was unveiled on Tuesday.

A consortium of architects called EUROPARC won 1st-prize in the international competition to ‘completely overhaul’ the Paul-Henri SPAAK Building.

The Paul-Henri SPAAK Building houses the main hemicycle that hosts mini plenary sessions. It is also where offices of the assembly’s president are located, the parliament’s main press centre and press conference room and MEP offices.

After just 25 years in service, the building’s infrastructure was seen as no longer adequate and was eyeballed for demolition.

That was until the European Parliament initiated the international design competition to renew the SPAAK building in July 2020.

“The jury applauded the genuine reuse approach adopted by this project, [which] allows to maintain most of the existing structure — and thus its embodied carbon — while providing it with a new external identity and an improved permeability to the public,” a statement from the body reads of the team’s winning proposal.

“The building should not be impenetrable but should be a place of openness,” the winners describe their entry, and this is reflected in their design they say “place[s] people at the centre of the spatial experience and brings them closer to the democratic processes of Europe.”

Its strategy entails a public realm expansion outside the building, with the addition of a new public pathway through the parliament stemming from the removal of part of the facade of the adjacent Spinelli building to present a grand and more democratic new entrance to visitors.

A modernised Hemicycle chamber is repositioned at the top levels of the structure, complemented by a rooftop garden whose view is established through large windows that also double as giant digital ticker tape when the assembly is in session.

A new Green Agora feature will occupy the top floor, culminating the visitors into a “gathering space” botanical garden populated by vegetation from each of the EU’s 27 member states.

This is meant as an important, environmentally-conscious reflection of the important exchange of ideas taking in the visible assembly below at a time when Europe faces ascendant challenges caused by climate change, economic uncertainties, and military conflict.

“With a war on the doorstep of Europe, and an ensuing energy crisis ever more pressing, the challenges faced by the European Union are shared by us all,” the brief reads finally.

“As a team of Pan-European offices composed of more than 30 nationalities, we understand and feel the impact of these difficulties directly.

“Our collective proposal to rethink the parliament building in a way that minimises environmental impact while expanding its openness and civic inclusion as embodiments of the values of European democracy are therefore evermore relevant.”