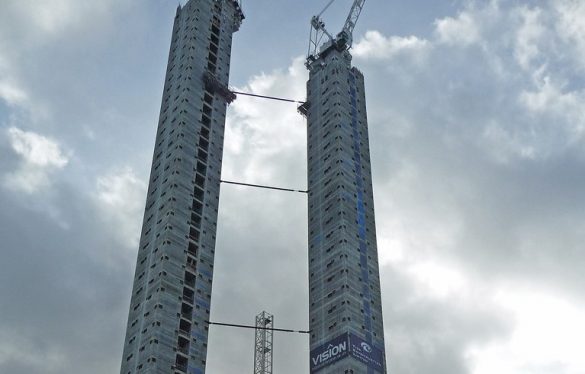 The building comprises 546 homes within a pair of 38- and 44-storey towers.

The design draws heavily on the heritage of the local mid-century buildings, including Richard Seifert’s No1 Croydon.

Realising a building of this scale and quality at speed required innovation in a variety of aspect areas within the fields of design and construction.

Virtual reality and 3D printing were utilised for rapid prototyping during the planning stages, and the angled modular façade and large-format glazed terracotta diamonds respond to orientation and aspect to create the distinctive design.

HTA began work on the concept in February 2017, gaining detailed consent before the end of the year.

There was also a significant reduction in waste and improved quality control to ensure higher performance.

Read next: Bridge structures shifted into place at Hexham junction in Northumberland