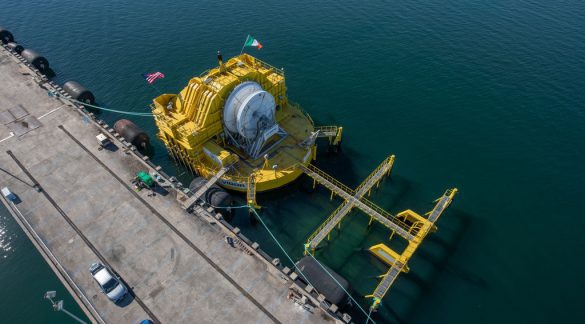 Wedusea, a consortium led by Irish firm OceanEnergy, has launched a €19.6m (£17m) project to promote the adoption of large-scale wave energy technology.

Co-funded by the EU Horizon Europe programme and Innovate UK, Wedusea brings together 14 industrial and academic specialists from the UK, Ireland, Germany and Spain.

The four-year Wedusea project has three phases. The first is the initial design of a device suited to European Marine Energy test site’s ocean conditions. This will be followed by the demonstration at the site, lasting two years.

The final phase will be commercialisation and dissemination of the technology. OceanEnergy and other consortium companies expect to exploit the results of the project through new innovations, products and services.

The results will also be disseminated to feed both environmental databases and IEC electrotechnical standards.

Prof Lars Johanning, from University of Exeter, one of the consortium members, said the project is set to be a major catalyst for the wave energy industry, “unlocking the full potential of this exciting renewable technology” that could help meet the challenges of climate change and the energy crisis.

“We believe this will be transformational for the wave energy industry, with outcomes directly impacting policy, technical standards, public perception and investor confidence.

“Wave energy is the world’s most valuable and persistent renewable resource. However, it has yet to be fully realised. The project will demonstrate that wave technology is on a cost-reduction trajectory and will thus be a stepping stone to larger commercial array scale-up and further industrialisation.

“We predict that the natural energy of the world’s oceans will one day supply much of the grid.”

The OE35 is the world’s largest capacity floating wave energy device. Floating on the ocean’s surface, the device incorporates a trapped air volume, with the lower part open to the sea. Wave pressures at the submerged opening cause the water to oscillate and drive the trapped air through a turbine to generate electricity.

This energy can be exported to the grid or used in other offshore applications.