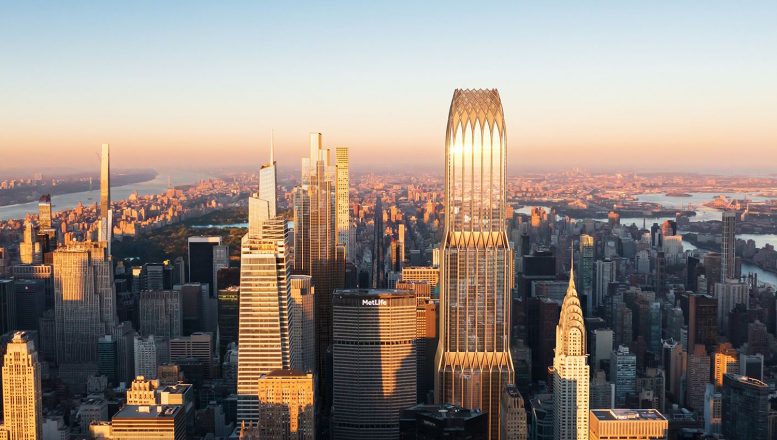 Rising 480m above the city, the new supertall will surpass the Chrysler Building, One Vanderbilt, Empire State, and Central Park Tower, to become New York’s tallest building by roofline.

The tower will also be the tallest building by roof height in the entire Western Hemisphere, beating the prior record-holder, Willis Tower, in Chicago.

Developed by RXR Realty and TF Cornerstone, the 85-story tower has been reduced in height from 500m to 480m.

175 Park Avenue will eventually rise from the site of the Grand Hyatt hotel between the 108-year-old Beaux Arts Grand Central Terminal and the 91-year-old Art Deco Chrysler Building.

The structure will yield 2.1m sq.ft of Class A office space; 500 Hyatt hotel rooms on the upper floors spanning 453,000 sq.ft; 10,000 sq.ft of retail space on the ground, cellar, and second levels; and an elevated, 25,000-sq.ft publicly accessible plaza space populated with artwork and views overlooking the surrounding Midtown streets.

The project involves an 18-month breakdown of the Hyatt before work can being on the construction of the new supertall.

AND Digital and Drax partner on EV fleet...

HP and VREX team up to accelerate BIM...

Reply Retweet Favorite
The construction site is changing - pens and notepads are being replaced by 3D models, drones, robots – and increas… https://t.co/U5boeLHaCh

Reply Retweet Favorite
ICYMI, Marshalls plc has appointed a new managing director to lead the commercial hard landscaping side of its busi… https://t.co/HEc1rr3I3D