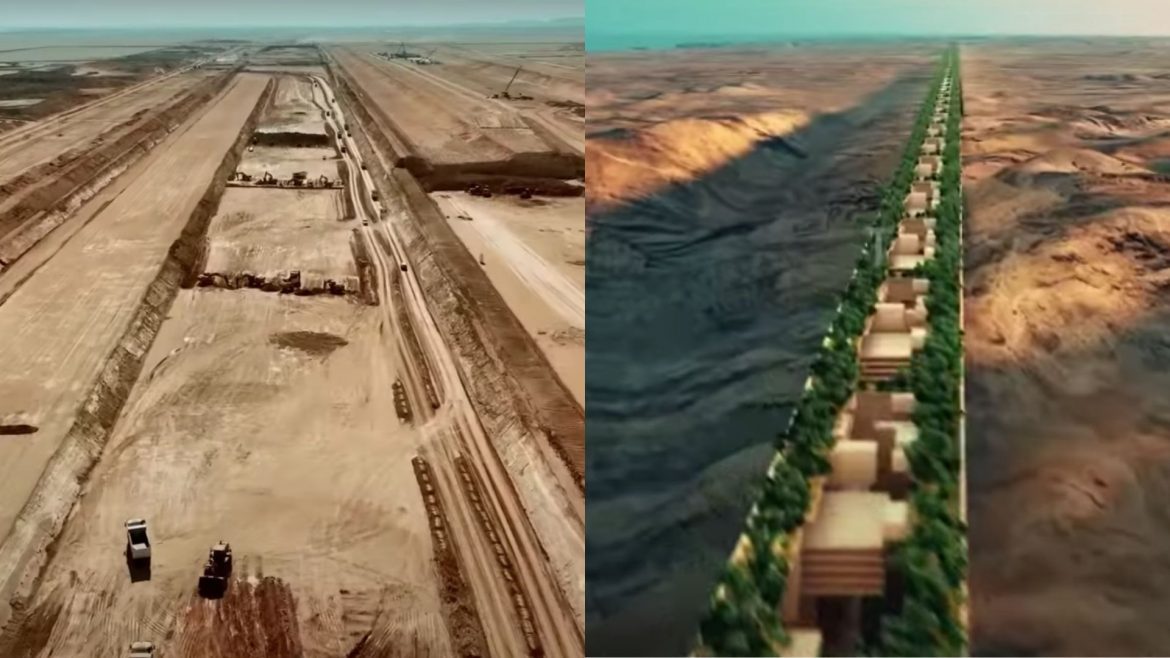 A new video has been released that shows footage of construction progress across Saudi Arabia’s smart city megaproject NEOM regions including The Line, Trojena, Sindalah, and OXAGON.

The brainchild of the Saudi Crown Prince and de facto ruler, Mohammed bin Salman, NEOM is expect to cost somewhere in the region of $500bn and aims to become “the industrial and business centre of the world”.

The centrepiece of NEOM is The Line, a planned 500-metre-high mirrored megacity comprised of two glass reflective buildings running parallel for 170km across coastal, mountain and desert terrain. The two buildings will be connected via walkways, and a high-speed train will run underneath them. The megastructure is projected to house nine million people who will be able to travel end-to-end in 20 minutes.

Unveiled in July 2022, many were skeptical that construction on The Line would ever begin. That was until the release of drone footage in October, and satellite images shortly after, revealing that construction on what would be the world’s largest structure is well underway.

And now, a new video released Monday appears to show significant progress on groundworks for the megacity (pictured top, left), in the three months since the drone footage was released.

OXAGON is an industrial and manufacturing complex that would float on the Red Sea and be run solely on clean energy.

Located on the edge of NEOM, OXAGON is slated to be one of the world’s most technologically advanced logistics hubs, equipped with technologies such as the Internet of Things (IoT), human-machine fusion, artificial and predictive intelligence, and robotics.

Sindalah, which covers an area of approximately 840,000 sq.metres, is set to be NEOM’s first luxury island destination.

The Sindallah project will include three hotels, 413 rooms (including 88 villas), and 333 serviced apartments.

It is the first of a group of islands that will be developed in NEOM, each with its own vision and design, and is expected to open its doors in 2024.

Trojena will be a giant ski resort and outdoor destination located in the mountains 50km off the Gulf of Aqaba coast.

Trojena will be in the centre of NEOM where there are some of the highest peaks in Saudi Arabia at approximately 2,600 metres above sea level, and will be centred around a man-made lake yet to be built.

NEOM called the Trojena project “a unique travel destination in the mountains of NEOM” where visitors can “journey to new heights”.

Trojena is expected to open to the public in 2026.

“We want to show the world that NEOM is really happening,” the developers of NEOM said in a press release on Monday.

20% of the project’s infrastructure has been completed, NEOM’s CEO Nadhmi al-Nasr told Al Arabiya at the World Economic Forum (WEF) in Davos on Thursday.

He addec: “The most important thing is being able to expand the infrastructure to all areas where we are ready to start building.”

Nadhmi Al-Nasr, NEOM CEO, elaborated: “If we are to solve the challenges of tomorrow, we must face up to them today, no matter how difficult they may seem.

“At NEOM, we are addressing some of the most pressing challenges facing humanity by bringing together a community of the brightest minds committed to reimagining what a sustainable future will look like in 20 to 30 years, and building it today. We are redefining the future now. NEOM is open for business.”

NEOM is owned by Saudi Arabia’s sovereign-wealth fund and is part of a framework called Saudi Vision 2030, a plan that seeks to diversify Saudi Arabia’s economy and reduce its dependence on oil.

However, the project hasn’t been without significant controversy, ranging from raised eyebrows over its sustainability to accusations of human rights abuses.

Human rights campaigners say that two towns have been cleared and 20,000 members of the Huwaitat forcibly removed, without adequate compensation, in order to build the megacity.

In September 2022, three members of a tribe were allegedly executed for opposing eviction from the construction site, Dezeen reported.

According to the BBC, critics also accuse the Saudi Crown Prince Mohammed Bin Salman of greenwashing.

However, proponents say it’s necessary to start afresh and build a smart, sustainable city powered by wind and solar, with water provided by carbon-free desalination plants.

The question remains – is NEOM humanity’s utopia? Or a dystopian nightmare?